TAIPEI (REUTERS) - Flight attendants at Taiwan's Eva Airways urged the airline on Thursday (June 27) to restart negotiations to end a week-long strike that has seen hundreds of international flights cancelled.

Nearly 300 flights were already cancelled since its cabin crew went on strike on June 20, including flights from Taipei to Chicago, Paris, Seoul and Hong Kong.

The week-long strike, which is the longest in Taiwan's aviation industry where labour unrest is uncommon, has led Eva Air to estimate a revenue loss of about NT$1.34 billion (S$58.5 million).

The union representing Eva Air's flight attendants made several concessions on Thursday on its demands to improve work conditions and pay, having failed to reach an agreement with the airline's management after a months-long negotiation.

"The union has adjusted our proposal and is urging Eva Air to restart the negotiation as soon as possible," it said in a statement. "We have been hoping that Eva Airways would restart negotiations swiftly to resolve the dispute."

Eva Air said it was still working on a statement when contacted by Reuters. The company has filed several lawsuits against the union since the strike began, including asking for a daily compensation of NT$34 million for what it sees as an "illegal strike". 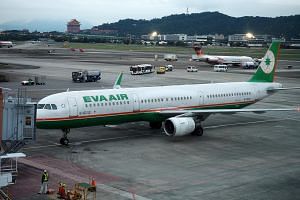 Strike forces Taiwan's Eva Air to cancel scores of flights, including those to Singapore

More than 2,000 flight attendants from Eva Air's all-female cabin crew took turns since June 20 to join demonstrations outside the firm's headquarters near Taoyuan International Airport, the union said. The protests were marked by signs, speeches and, at times, scuffles between cabin crew and representatives from Eva Air.

On Thursday, a giant inflatable balloon that read "come home" was seen floating above Eva Air's headquarters, as cabin crew responded with a large sign saying "we couldn't see our way home yet".

Eva Air, best known internationally for the Hello Kitty livery on some of its jets, operates flights to many destinations around Asia as well as to North America and Europe.

Pilots at rival China Airlines went on strike in February, leading to 122 flight cancellations and NT$220 million in lost revenue.