TAIPEI - Taiwan plans to ban the video streaming services of Chinese-owned technology companies, in the latest move by the island to counter the alleged spread of false information online and curb perceived efforts by Beijing to influence Taiwanese politics.

The decision would apply to services such as Baidu's iQiyi platform, which already operates in Taiwan, and fend off an anticipated market entrance from Tencent Video, the Financial Times said on Tuesday (April 2).

It follows allegations of Beijing's involvement in the creation of disinformation and spreading Chinese propaganda undermining President Tsai Ing-wen and candidates from her ruling Democratic Progressive party in the lead up to November's local elections, the report said.

Scarred by the party's trouncing at the polls - and with an eye to presidential and legislative elections now 11 months away - Ms Tsai's administration is also increasing penalties for the publication of false information online and is establishing task forces in every government ministry to deal with the issue, FT reported.

"Fake news has caused much confusion between the government and Taiwanese society and poses a threat to our democracy," the presidential office said.

Tech companies including Google and Facebook have criticised Taiwan's crackdown, which has also sparked censorship fears, reported the London-based newspaper. But it comes amid heightened international scrutiny over the Chinese government's overseas activities and as several countries struggle to stem a torrent of false information online.

"We cannot solve the misinformation problem just by amending the laws, we have to do more," said Ms Kolas Yotaka, spokesman for Taiwan's Cabinet.

Analysts, however, were cited by FT as saying it was difficult to prove that Beijing was behind the spread of fake news in the lead-up to the 2018 polls.

Professor Hu Yuan-hui of National Chung Cheng University, who is the head of an independent fact-checking centre in Taiwan, said researchers had "no way to distinguish which disinformation is directly produced by the Chinese government, and which is not".

He added, however, that there was evidence "many" fake news items were transplanted from Chinese websites or sent to Taiwan via social media and messaging services. 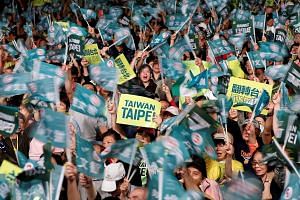 Officials in Taipei warned that if spreading disinformation online was successful in Taiwan, it would "be used by China in other places" as well.

Tencent and iQiyi declined to comment about the ban on Sunday, which was first reported by Nikkei Asia Review.

Other major technology companies - under intense pressure globally for their role in spreading misinformation and fuelling political division - have lobbied Taiwan to ditch plans for stricter oversight of their platforms.

They say the measures threaten freedom of expression and warned the crackdown could harm investment in Taiwan.

A spokesman for Line, Taiwan's most popular messaging service, said "all messages sent between users are encrypted from end to end", meaning broad oversight of content sent through messages was not possible.

Facebook, Google and Line also said they funded programmes in Taiwan to boost media literacy, adding that Taiwan was included in the companies' efforts to combat the problem globally.

But it is not only tech companies that are worried about the government's plans.

"If (the Taiwanese government) finds a way to censor what they consider fake news without a legitimate legal process... they would use the exact same weapons as the weapon that is used by the Chinese authorities," he said.

Officials in Taipei, however, said they have been cautious.

"We have been very careful on this because freedom of speech is the very spirit that makes us different from China," said Ms Kolas Yotaka.