TAIPEI/BEIJING (REUTERS) - Taiwan on Wednesday (Feb 28) warned its companies and people to exercise caution and not rush to China's embrace after Beijing released new measures meant to further ease investment by Taiwan firms.

Taiwan companies have flocked to China since the two sides begun a detente in the 1980s, attracted by far lower costs and a common language and culture.

China claims sovereignty over self-ruled Taiwan, and has pledged to make life easier for Taiwanese companies and people living in China, who the government views as essentially Chinese citizens.

"They are aimed at sharing the opportunities of the mainland's development with Taiwan compatriots," the office said of the measures.

However Taiwan's Mainland Affairs Council urged vigilance, warning that China, which has not renounced the use of force to ensure eventual unification, had not changed its policy.

China "recently has continued to tighten up and put pressure on us, and at the same time has come out with so-called 'measures to benefit Taiwanese' to entice our people", the council said.

"The mainland side has for a long time repeatedly put forward many types of similar measures, all of which are aimed at unilaterally enhancing the benefits of its economic development goals and absorbing Taiwan's resources," the council added. 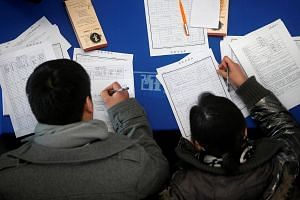 Taiwan and China have different systems, laws and values, it added, in a pointed reference to Taiwan's freewheeling democratic system in contrast to China's autocratic form of government.

"Before participating, companies and people should cautiously evaluate the risks and effects of the costs."

While China has become increasingly hostile towards Taiwan since Ms Tsai Ing-wen from the pro-independence Democratic Progressive Party won the presidency two years ago, it has redoubled efforts to reach out to ordinary Taiwanese.

Those have included incentives to young Taiwanese to set up businesses in China.

Ms Tsai has repeatedly expressed her goodwill towards China. Beijing, for its part, wants Ms Tsai to acknowledge that Taiwan and China are part of the same country.

In a speech to foreign diplomats in Taipei on Tuesday evening, Ms Tsai said she would not change her position of maintaining the current status quo in the Taiwan Strait, a reference to Taiwan not seeking independence and China not seeking to force unification.