TAIPEI (AFP) - Taiwan independence campaigners will take to the streets on Saturday (Oct 20) for what they hope will be a major rally in a rebuke to Beijing and a challenge to the island's already embattled government.

The protest in central Taipei comes as China increasingly pushes its claims to the self-ruling democratic island and President Tsai Ing-wen struggles to appease Beijing and independence factions.

Organised by the new Formosa Alliance, which is backed by two pro-independence former Taiwan presidents, Mr Lee Teng-hui and Mr Chen Shui-bian, the rally will call for a public vote on whether the island should formally declare independence from China.

It is the first potentially large-scale protest calling for an outright independence vote since Taiwan first became a democracy more than 20 years ago.

"Every Taiwanese should get to choose Taiwan's future. It should be a decision by the 23.57 million Taiwanese people, not by China or Xi Jinping," said veteran independence activist Kuo Pei-horng, head of the alliance.

Taiwan considers itself a sovereign state, with its own currency, political and judicial systems, but has never declared formal independence from the mainland.

Beijing has warned it would respond with force if Taiwan tried an official split.

Chinese authorities have already said the Formosa Alliance should not go down what they called a "dangerous path".

But Mr Kuo, 63, who was blacklisted by Taiwan's authoritarian Kuomintang government in the 1980s for promoting independence, says it is worth the gamble.

"I think if (China's President) Xi were ready to invade Taiwan, his troops would have already come or he could have found any excuse to do it," Mr Kuo told AFP.

New Power Party chairman and lawmaker Huang Kuo-chang, who made his name as a leading activist during the anti-China Sunflower Movement rallies of 2014, said the public should join Saturday's rally to "say no to China's ambitions to annex Taiwan".

Beijing is already incensed by a referendum that will take place in November asking for the island to compete as "Taiwan" and not "Chinese Taipei" in the next Olympics and other international sports events.

China is particularly sensitive to the island's use of names, emblems and flags, as it sees them as an expression of Taiwanese sovereignty, and under Beijing pressure, Taiwan has to compete internationally as "Chinese Taipei". 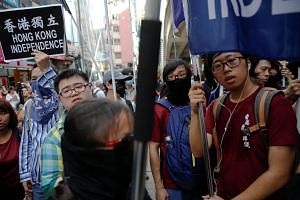 Taiwan fights for allies and identity amid Chinese pressure

Even though her Democratic Progressive Party (DPP) is traditionally independence-leaning, Ms Tsai has said she wants to maintain the status quo with China.

But that has not prevented relations from deteriorating since she took office in 2016, as she refuses to adhere to Beijing's line that Taiwan is part of "one China".

Beijing has made a multi-pronged attack to erase the island from the international stage, including blocking it from global forums and poaching its dwindling number of official diplomatic allies.

"These efforts are symbolic of the rising frustration of seeing a cautious DPP leader being punished by China, even when she's making the effort to be careful and conservative in cross-Strait relations," Dr Sullivan told AFP.

A vote on independence would require an amendment to current laws, which bar referendums on changing the Constitution or sovereign territory.

Analysts agree Ms Tsai would be unlikely to allow such an amendment, which would be a red flag to Beijing.

The DPP has publicly prohibited its officials and candidates from attending Saturday's rally, which will be held outside the party headquarters.

But observers say independence campaigners feel a sense of urgency in any case, as the DPP holds the leadership and a parliamentary majority for the first time.

"For the activists now is a golden time to push their cause," says Dr Chang Ya-chung, a political analyst at National Taiwan University.

Some voters agree that there needs to be a new effort to carve out a place in the world for Taiwan.

"I think Taiwanese consciousness is increasing and the consensus to rectify our country's name is also on the rise," graduate school student Hung Pang-jen, 23, told AFP in Taipei.

Others are more cautious.

"Taiwan is already at a disadvantage internationally and if Tsai pushes for independence, we will be further marginalised and isolated," said college student Kuo Yu-hsuan, 20.