TAIPEI - Taiwan will encourage its people to boycott airlines that list the island as a Chinese territory on their websites due to pressure from Beijing, the Financial Times reported on Monday (June 18).

"We will tell our people: 'Those are the airlines that caved in to China, it is your choice [whether to use them],' " the London-based newspaper cited Mr David Lee, secretary-general of Taiwan's National Security Council, as saying.

Mr Lee said countermeasures against Beijing's "excessive" aggressiveness could include legal action against companies that labelled Taiwan as part of China, although he added that it would be a complex process and "may take two to three years" to obtain a ruling.

"It is a signal that we are fighting back, that we won't just sit idle here," Mr Lee said according to FT.

China's aviation regulator in April gave dozens of airlines a May 25 deadline to remove references on their websites and in other material that suggest Taiwan, Hong Kong and Macau are countries independent of China. It later extended the deadline to late June.

The White House has described the aviation order as "Orwellian nonsense", while Taiwan has repeatedly condemned it as "bullying". 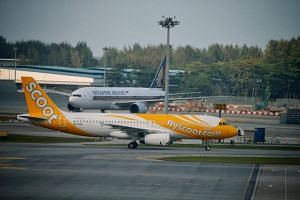 Singapore Airlines and its low-cost subsidiary Scoot made the change last week, prompting a protest from Taiwan's representative office in Singapore.

Ms Lauren Dickey, a Washington-based Taiwan analyst and a researcher at King's College London, was cited by FT as saying Taiwan's fight-back would mark the first time that the Tsai administration had actively stood up to Chinese pressure.

"They are standing up against a bully, for a change," she said. President Tsai Ing-wen has previously called on "businesses to resist China's efforts to mischaracterise Taiwan".

The sterner approach follows an increase in support for Taipei from the US, which last week opened the American Institute in Taiwan, a US$255 million de facto embassy based in Taiwan's capital.

Beijing appeared to be trying to create "the impression that a fact exists, that does not exist", said Mr James Moriarty, the US-based chairman of the AIT.

"It is an unfortunate interference in commercial matters to prove a political point that at its core is not accurate. Taiwan is not a province of the People's Republic of China," he said.

Beijing’s actions against the airlines was one of several measures, including poaching Taiwan’s diplomatic allies - most recently Burkina Faso - and increased military activity around Taiwan.

Ms Dickey noted that Taiwan’s actions would be regarded as “inflammatory” and would almost certainly prompt a response from Beijing.

She was concerned that relations between China and Taiwan could change from “a low simmer to a steady boil, and that volatility is particularly troublesome”.