All eyes on whether younger voters, who say they back Tsai, will turn out to vote

Voters and candidates alike readied themselves for a general election today that local media has billed the "battle between the generations", as Taiwan's three presidential candidates capped off their campaign rallies with a flourish.

According to the island's Central Election Committee data, there are about 20 million eligible voters this year, with nearly one in five (19.38 per cent) in their 40s - the biggest group - followed by voters in their 50s at 18.81 per cent.

Polls have shown that middle-aged and older voters form the bulk of support for Kuomintang candidate Han Kuo-yu, 62. All eyes are on younger voters, who have indicated they will vouch for the incumbent, President Tsai Ing-wen, 63.

But it remains to be seen if they will vote today.

In Ms Tsai's first election victory in 2016, only 57.73 per cent of eligible young voters between 20 and 39 cast their ballots. In comparison, more than seven in 10 voters in their 40s and 50s turned up at the polls.

But in 2020, the "dried mango" threat may push younger voters to turn up and vote. Mangguogan, or dried mango, is a popular snack among Taiwanese, but sounds like and is used politically to mean "wangguogan" or "sense of a nation's doom" or, to Taiwanese, "the end of Taiwan as we know it".

It is something Taiwan's youth have reported feeling if the day comes when China's "one country, two systems" policy is imposed on the island.

Mr James Soong, 77, founder of the People First Party, is the third candidate. His participation in the presidential election for the fourth time is likely to energise his party, boosting its chances of winning some seats.

Coming on the back of more than six months of unrest in Hong Kong, the elections in Taiwan are receiving more attention than usual from foreign media, researchers and scholars because of the Tsai administration's tense relationship with China.

There were more than 113 foreign news organisations covering the elections and 13 groups of foreign election observation groups in Taiwan as of yesterday, including the United States' Hudson Institute, the American Enterprise Institute for Public Policy Research and the Association of World Election Bodies, said Ministry of Foreign Affairs spokesman Joanne Ou.

The number of overseas Taiwanese returning to vote has doubled since the last elections.

This year, 5,328 Taiwanese living overseas applied to vote, compared with the 2,425 in 2016. Taiwan does not accept absentee ballots. 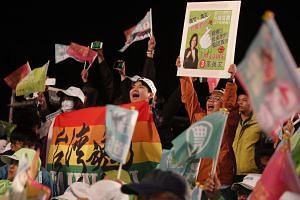 Social reforms as important as sovereignty for the young

Taiwan's Jan 11 elections: How does it work?

Mr Liu Feng-yi, a PhD candidate studying social welfare at Rutgers University, amassed a team of overseas Taiwanese in New York and neighbouring cities to produce a series of videos calling on fellow overseas Taiwanese to go home and vote.

"I am doing this to defend Taiwan's democracy," he said. For the videos, they interviewed Taiwanese people in their 70s and 80s who have been living in the US for decades, as well as students studying in America, younger couples who have just started a family and those who hold dual citizenship.

He observed that many overseas Taiwanese were concerned about Taiwan's sovereign rights, and less so about domestic issues like labour law reforms and social welfare policies. "And they want someone in power who can defend the sovereignty," said Mr Liu, 34.

Many were moved by the videos and have decided to fly back to vote, he added. "I saw older people who were touched by how younger overseas Taiwanese are determined to go home for the elections... They said they wanted to do the same, for the younger generation's future."

Voters will also be voting for legislators, as well as casting a "political party vote" that parties can use to gain "at-large" legislature seats according to the percentage of party votes they receive.

This year, there are 19 parties vying for the at-large seats, a record high in Taiwan's history of legislature elections.