The exercises are taking place off the southeastern Chinese city of Quanzhou, in between two groups of islands close to China's coast but which Taiwan has controlled since 1949 when defeated Nationalist forces fled to Taiwan at the end of the Chinese civil war.

Chinese state media has said the drills are a direct response to "provocations" by Taiwanese leaders related to what China fears are moves to push for the island's formal independence.

"The Chinese communists have been using cheap verbal intimidation and sabre-rattling on every aspect of the Republic of China in the hope of affecting our morale or creating social unease," said Defence Ministry spokesman Chen Chung-chi.

Describing as "nonsense" some Chinese commentaries that the drills this time are larger than usual, Mr Chen said they were only a short-range shooting exercise close to the China coast, not military drills in the Taiwan Strait.

"That's why we say it's a verbal intimidation and sabre-rattling... using public opinion to exaggerate the falsity... and playing up an exercise into unification of Taiwan by force."

Mr Chen said the ministry was monitoring the situation and it had no plan to escalate alerts or states of readiness.

On Tuesday, Taiwan started its own live-fire shooting exercises in Matsu and Kinmen, two Taiwanese islands close to China.

Chinese state television said the exercises would start at 8am and last until midnight, but did not immediately provide any other details.

Taiwan is one of China's most sensitive issues and a potential military flashpoint. China has ramped up military exercises around Taiwan in the past year, including flying bombers around the island.

The latest Chinese military movements come during a time of heightened tension between Beijing and the self-governed island and follows strong warnings by Chinese President Xi Jinping against Taiwan separatism last month.

China claims democratic Taiwan as its own and considers the island a breakaway province. 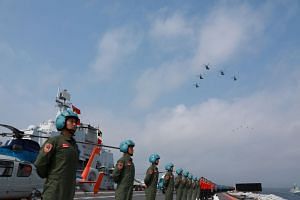 China's hostility towards Taiwan has grown since Ms Tsai Ing-wen from the pro-independence Democratic Progressive Party won presidential elections on the island in 2016.

More recently, China has been incensed by comments by Taiwan Premier William Lai in support of Taiwan independence, though the island's government says Mr Lai's position remains that the status quo across the Taiwan Strait should be maintained.

Chinese state television, in a report on its WeChat account, said the drills were at least partly a response to Mr Lai's comments.

China has also been upset with moves in Washington to bolster its unofficial ties with Taipei, including arms sales.