TAIPEI (AFP) - Conservative campaigners on Tuesday (Aug 28) threw a roadblock in the path to legalising same-sex unions in Taiwan, proposing a public vote on the issue and saying any reforms would jeopardise "family values".

Taiwan's top court ruled in May 2017 that preventing same-sex marriage was unconstitutional and gave a two-year deadline for its legalisation - which would make the island the first place in Asia to do so.

But there has been little progress on the issue since then, with President Tsai Ing-wen saying society is still divided on the issue.

The anti-gay marriage Happiness of the Next Generation Alliance submitted a referendum petition to election authorities on Tuesday to try to prevent the civil code from being amended to recognise same-sex partnerships.

If successful, the move may instead require a separate law to be enacted for civil unions between same-sex couples - a move that gay marriage campaigners say would be discriminatory and offer fewer legal protections.

"The bottom line of basic family values shouldn't be overturned," alliance spokesman Tseng Hsien-ying told reporters after the petition was brought to the election commission.

"The collapse of the family system will deal a huge blow to society."

Last year's court decision did not give specific guidance on how same-sex relationships should be legislated. 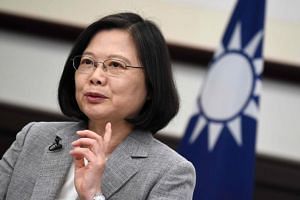 The petition collected more than 678,000 signatures. If vetted and approved by the Central Election Commission, the referendum will be held to coincide with local elections in November.

The group said it would also lodge two more petitions with the commission later on Tuesday.

One would remove same-sex education from the school curriculum, while the other redefines the civil code's definition of marriage as being between a man and a woman.

The commission said it had a number of other referendum proposals to process first and would handle the group's petition later on Tuesday or Wednesday.

Gay rights campaigners are also rushing to gather signatures for their own referendum proposal, which would ask the public to vote to enshrine same-sex marriage in the civil code.

"We have to let those in power see very clearly the wishes of the people, and we hope they can amend the legislation as soon as possible," said Ms Miao Bo-ya, a key activist behind the campaign.

Referendum proposals in Taiwan are put to a public vote if they are supported by 1.5 per cent of the electorate - a little over 280,000 signatures.

Plebiscites are legally binding and the government is obliged to propose laws that reflect their results.