TAIPEI (AFP) - Fishermen and their families took to the streets in Taiwan on Tuesday (Nov 6) against what they said was an unfair crackdown on the industry which has been accused of illegal practices and human rights abuses.

The rally by coastal and long-haul fishermen in the capital Taipei is the latest challenge to President Tsai Ing-wen, who has already faced major protests by disgruntled military veterans and labour unions over pension and other reforms.

It comes ahead of local elections on Nov 24, seen as a midterm barometer after Tsai's first two years in office.

Over a thousand people gathered outside the agriculture council building, blowing horns and throwing paper money before marching to the legislative building. Many had travelled up from the south of Taiwan where the industry is concentrated.

"I understand the need for sustainability, but government enforcement has been too tough and the fines too high," said one protester who works on a deep-sea fishing boat and gave his surname as Tsai, adding his earnings have dropped considerably since new rules were introduced.

But in the past three years, it has been targeted by domestic and international agencies over poor regulation and conditions. 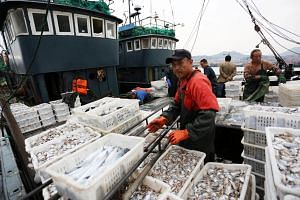 Chinese trawlers travel farthest and fish the most: Study

Taiwan has imposed tougher laws and penalties since the European Union issued the island with a "yellow card" in 2015 for "serious shortcomings" in its management of the industry.

A decision on whether that warning will be lifted is expected next month.

Tsai Bao-Hsin, head of the Liuchiu Fishermen Association of coastal fishing fleet owners, told AFP ahead of the rally that catches are shrinking.

He accused the government of kowtowing to EU demands without considering the impact on communities.

Wang Shin-chan, head of the Fishermen Self-Help Association, told AFP that penalties introduced by Taiwan's fisheries agency were too high.

A 2016 Greenpeace report described Taiwan's fishing industry, which uses thousands of migrant workers, as "out of control", with rampant labour and human rights abuses, including physical abuse and witheld payments.

The industry has also been criticised for the practice of shark finning - where the predators' fins are sliced off and the rest of the still-living body dumped back into the ocean.

Taiwan enacted its own Distant Water Fisheries Act in 2017 to curb illegal, unreported and unregulated activities.

But in May this year, a Taiwanese fishing boat became the first to be detained by the UN's labour organisation for violating its new industry rules.

The boat was detained in Cape Town, South Africa, and inspectors found a lack of documentation and poor health and safety conditions, according to the International Labour Organisation.

The owner of the ship and the captain were fined NT$3.75 million by the Taiwan authorities when it returned to base in September.