SHANGHAI/TAIPEI (Reuters) - Taiwan angered Beijing on Saturday (April 16) by freeing 20 suspects in a telecoms fraud case linked to China that were deported from Malaysia, in a case that has put more pressure on the sensitive relationship between the two countries.

Malaysia had deported the 20 people, who were part of a group of 53 Taiwanese arrested there in March on suspicion of fraud, according to the Taipei Foreign Ministry.

Taiwan's Executive Yuan spokesman Sun Lih-chyun told Reuters there was no legal reason to detain them.

"The evidence is not with us. It is with China," he said, noting that Taipei has been talking to Chinese counterparts on the matter so investigations can begin on the self-ruled island. 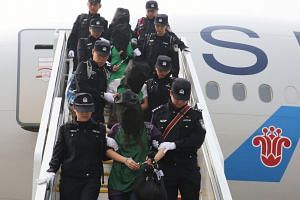 The decision was not welcomed by China. "By releasing the suspects, Taiwan authorities disregarded many victims' interests and harmed them a second time. It also harmed the two sides' cooperation in jointly cracking down on crimes," state-run Xinhua quoted Mr An Fengshan, the Chinese State Council's Taiwan Affairs Office spokesman, as saying.

Taiwan should give the suspects "the punishment they deserve", Mr An was quoted by the news agency as saying.

In a statement issued on Saturday, Taiwan's Cabinet said that the government would not shield people suspected of crime and that it had instructed the Ministry of Justice to gather information for investigation.

Taiwan's Justice Ministry sent a formal letter requesting China's public security bureau to provide information on the crime once it knew the 20 suspected Taiwanese were returning to Taiwan from Malaysia, the statement said.

Separately, Taiwan has objected to the forcible deportation of more than 40 Taiwanese people to China from Kenya also on suspicion of telecoms fraud.

China's Ministry of Public Security says Taiwanese people have been heavily involved in telecoms fraud in China and had caused huge losses, with some victims killing themselves.

Taiwanese criminals "have been falsely presenting themselves as law enforcement officers to extort money from people on the Chinese mainland through telephone calls", it has said.