TAIPEI (AFP) - A popular Taiwanese mayor launched a new party on Tuesday (Aug 6) that could chip away at the two main political camps that have long dominated the island's politics as it heads towards crucial elections in January.

Former trauma surgeon Ko won the Taipei mayoralty as an independent and built a reputation for being something of a maverick with an especially effective social media presence.

When Mr Ko was locked in a tight race for re-election last year, he made a rap music video aimed at reaching out to younger voters that quickly went viral.

He is often known by his nickname "Ko P" - the P being a reference to the fact that he was once a medical professor.

The island will vote for a new president and Parliament in elections in January set to be dominated by relations with China.

Taiwan has been a de facto nation since the end of a civil war in 1949, but Beijing still views the island as its territory and has vowed to seize it - by force if necessary.

Relations between Communist-ruled Beijing and Taipei have plummeted since President Tsai Ing-wen came to power in 2016 because her party refuses to recognise the idea that Taiwan is part of "one China".

Ms Tsai, who is seeking a second term with her DPP party, has described January's election as "a fight for freedom and democracy". 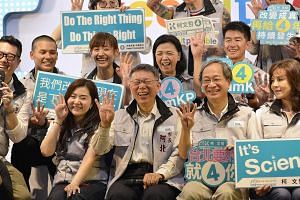 Can Ko-P repeat his miracle win? Dr Ko Wen-je was famous long before he became mayor of Taipei

Her main challenger is the KMT's Han Kuo-yu, who favours warmer relations with China.

Mr Ko's precise views on China are less clear cut, but he has adopted the slogan "The two sides are one family", sparking criticism from the Beijing-sceptical DPP.

Speculation is rife that Mr Ko could run as a presidential candidate himself - or team up with Taiwan's richest man, Foxconn founder Terry Gou, who lost to Mr Han in the KMT primary.

A poll conducted by Apple Daily newspaper released on Sunday showed that Mr Ko and Mr Gou would be clear favourites if they teamed up - with support ratings of 31 per cent compared to Mr Han's 27 per cent and Ms Tsai's 25 per cent.

Mr Ko remained tight-lipped about any presidential ambition but said he hopes to build a "clean and diligent" government to regain people's trust with his Taiwan People's Party (TPP).