In this editorial, the paper says assistance measures must be bolstered so that Hokkaido residents can promptly return to their lives before the earthquake.

TOKYO (THE YOMIURI SHIMBUN/ASIA NEWS NETWORK) - A half month has passed since the Hokkaido earthquake, which registered the highest level on the Japanese seismic intensity scale of 7. To realise Hokkaido's post-quake rehabilitation, it is indispensable to rebuild its industries.

A power blackout that spread to all parts of the prefecture has been resolved. The No. 1 unit at the Tomato-Atsuma thermal power plant - a facility that plays a central role in the supply of electricity there - has been brought back on line. The government has withdrawn its request for power-saving, and neon lighting has returned to flourishing areas in Sapporo.

However, scars from the earthquake have not yet healed. Even if the amount of direct damage, including that caused to roads, rivers and forest land, is calculated alone, the figure exceeds 150 billion yen (S$1.8 billion). There are still many disaster victims in evacuation centres.

The central and pertinent local governments should bolster their assistance measures so Hokkaido residents can promptly return to their lives before the earthquake.

First of all, it is essential to establish a system for a stable power supply. As it becomes more and more chilly from now on, electric power demand for heating and other activities will increase. Hokkaido Electric Power should make quick efforts to resume operations at two suspended units at the Tomato-Atsuma power station.

The impact of the large-scale power failure extended even to areas distant from the quake's focus. As electric milking machines could not be powered to use, a large number of cows developed mastitis. Unable to keep raw milk in cold storage, one dairy-farming household after another discarded the milk.

The earthquake dealt a major blow to the agriculture, forestry and fisheries industries in Hokkaido - the mainstay of the area's industrial structure - including damage caused to agricultural facilities, irrigation and drainage canals. The amount of losses totals no less than 42 billion yen. 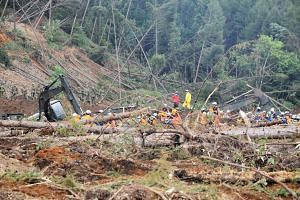 Hokkaido hotels hit by 500,000 guest cancellations due to earthquake

As assistance measures for disaster-stricken areas that will be included in a supplementary budget for fiscal 2018, the government should implement effective steps, including low-interest loans to farming households.

The quake has also caused serious losses to Hokkaido's tourism industry. They include cancellations of reserved accommodations for 940,000 people and reservations for 4,000 sightseeing buses. Among other things, cancellations of large-scale school excursions may have been a heavy blow. The loss of profits tied to accommodations, as well as at eating and drinking establishments, reaches a total of 29.2 billion yen.

In recent years, non-Japanese have accounted for 25 per cent of the amount of money spent for tourism-related consumption in Hokkaido. Travellers from China, Taiwan and South Korea, who constitute a main portion of the total, are said to be sensitive to earthquakes. To prevent a reduction in the number of foreign tourists to Hokkaido, the Japan Tourism Agency and the prefectural government should increase efforts to dispatch information conducive to shaking off their anxiety.

The number of tourists dropped in the wake of the Hokkaido Nanseioki Earthquake in 1993 and the Mt. Usu eruption in 2000.

The hesitation felt about enjoying trips to Hokkaido in consideration of disaster victims' feelings, as well as anxiety about an aftershock, is understandable. Nonetheless, tourism is an important industry for Hokkaido. If Hokkaido attracts fewer tourists, it will come as a dual blow to the prefecture. It is hoped that Hokkaido's rehabilitation will be backed by recovering the bustling feel there to a pre-quake level.

Prime Minister Shinzo Abe has expressed his intention to quickly extend official assistance that discounts accommodation fees for travellers in all parts of Hokkaido. The government took similar steps in the wake of the Kumamoto Earthquake and torrential rains that struck western Japan. It is necessary to take every possible means.

The Yomiuri Shimbun is a member of The Straits Times media partner Asia News Network, an alliance of 23 news media organisations.