"The SIP is now the top industrial park in China, and has been ranked first among China's Economic and Technological Development Zones for three consecutive years since 2015," Mr Teo told Xinhua Daily in an interview.

"It is also a liveable city and a symbol of effective governance, adaptability and willingness to innovate."

Mr Teo, who is on an official trip to China, called on Jiangsu Party Secretary Lou Qinjian, Jiangsu Vice-Party Secretary Wu Zhenglong, and other top provincial officials here on Friday.

Mr Lou said the SIP, the first government-to-government project between China and Singapore, showed the long-term vision that earlier leaders had for the bilateral relationship.

"As early as 1994, we decided to establish the SIP here as a major project between the governments of Singapore and China, which showed that our predecessors had very high political vision and strategic wisdom," he said.

Mr Teo said the SIP is also a microcosm of Jiangsu's development, and how the province has, in line with China's reform and opening up, drawn on its abundant and educated talent pool and the enterprising spirit of its people to transform itself into a modern, dynamic and innovative province. 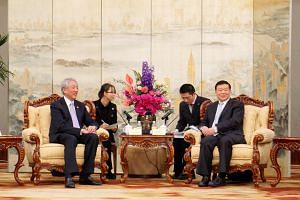 The next phase of the SIP's development will also be guided by China's overall development priorities, said Mr Teo.

"I am confident that the SIP will continue to be a pathfinder in new areas, such as driving innovation, enabling start-ups and producing high-quality growth," he said.

Mr Teo will also be in Shanghai for Singapore Day on Saturday, which will bring together Singaporeans living in China. He had earlier met central officials in Beijing.