TAIPEI (AFP) - A controversial statue of former dictator Chiang Kai-shek was vandalised in Taipei on Friday (Feb 22), stoking tensions over Taiwan's fractious relationship with China a week before the island marks the anniversary of a massacre by nationalist Chinese troops.

An estimated 28,000 people were killed in the 1947 crackdown on island-wide riots after mainland troops were called in to quell the unrest under Chiang, whose Kuomintang (KMT) party governed Taiwan as part of China at the time.

Revered as a hero by the island's pro-China camp for fighting the Communists but despised as a dictator by many Taiwanese, Chiang ruled with an iron fist until his death in 1975.

Public statues of the authoritarian leader are regularly vandalised and hundreds now lie discarded in the grounds of his mausoleum outside Taipei.

The latest statue to be hit shows Chiang riding a horse. Bright paint was thrown on it, and one of the horse's legs was sawed off.

A group of university students claimed responsibility for the attack, saying on social media that they wanted to raise public awareness about the "importance of removing Chiang's statue because it represents dictatorship".

The incident occurred three days after a pro-China activist vandalised a sign at a memorial to victims of the 1947 massacre, broadcasting the act live on social media. 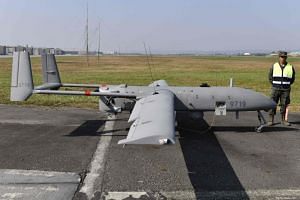 Ties between Taipei and Beijing have been frosty since 2016 following the election of President Tsai Ing-wen, who refuses to acknowledge that the self-ruled island is part of "one China".

Beijing, which still sees democratic Taiwan as part of its territory awaiting reunification, has stepped up military drills and poached many of Taipei's dwindling diplomatic allies.

Tsai is squeezed between China and more radical members of her own party who favour pushing for independence - something Taiwan has never formally declared.

Last October, tens of thousands of Taiwanese took to the streets in the first large-scale protests calling for an outright independence vote since the island became a democracy more than 20 years ago.

The Beijing-friendly KMT has called for better relations with China, citing economic benefits and historical ties between the two.