BEIJING (CHINA DAILY/ASIA NEWS NETWORK) - Unlike many of her peers who spend their days looking after the grandchildren and hanging out in parks, retiree Yang Suxia leads a dance troupe in central China's Tangshan, Hebei province, that has about 80 members.

This year, Madam Yang's team, Carnation, is scheduled to participate in 100 events. More than half of these events are provincial or national level contests attended by thousands of middle-aged aunties, more commonly known as damas.

"Competition brings out the best of us. Square dancing gives us elderly people an incentive to get up every morning, and competitions provide us with a reason to keep dancing," said Madam Yang, 64, who created the troupe in 2001 with seven neighbours and colleagues.

The Looking For China's Most Beautiful Queen of Square Dancing competition is one of the largest of its kind in the country. The competition lasts for almost half a year and is attended by more than 35,000 dancers from 25 provinces. Carnation was one of the 10 teams out of 3,500 troupes that made it to the finals held in Shanghai in December.

Dressed in emerald green traditional Chinese costumes and jet-black circular sunglasses, the team's performance was inspired by Chinese shadow puppetry, an ancient form of entertainment and craftsmanship that is believed to have originated in Tangshan. The team finished third in the competition last year.

"We are happy with the result, considering the fact that we only spent less than two months preparing for the contest. Besides, none of us started dancing to become a dancing queen. We just want to exercise and kill time," said Madam Yang.

Square dancing in China first started to gain popularity in the 1990s. Then, it was a casual activity that required little organisation and, like today, it took place across the nation's parks and pedestrian streets.

There have even been incidents where the damas took their passion for the activity to other countries, dancing at landmarks such as the Louvre in Paris, France, and the Red Square in Moscow, Russia.

Today, the activity has become so popular that it has even been considered a sport in China. Last year, square dancing was for the first time included in China's National Games which took place in Tianjin.

According to professor Li Xiangru at Capital University of Physical Education and Sports, there were at least 10,000 provincial and national level competitions held across the country last year.

Meanwhile, the General Administration of Sport estimated that there were around 180 million active square dancers in China as of the end of 2017.

"Regardless of all the social and entertainment functions of square dancing, it is essentially a sport. And sports need judges, ratings and winners to keep it moving forward," said Prof Li.

This popularity has also translated into business opportunities for many enterprises.

At the first Square Dance Development Forum that took place in November (2017) in Hainan province, Mr Peng Qiang, founder and CEO of WYZ Sports, called square dancers "walking wallets" during a public speech that addressed the business potential of the industry.

"In China, dancing grannies are usually the accountants of their household. Reaching them means reaching the bank accounts of the millions of families in the country," Mr Peng said.

Established at the end of 2016, Mr Peng's Beijing-based agency links sporting activities with corporate sponsorship. Last year, WYZ Sports helped 20 clients sponsor more than 40 sports, half of which were marathons.

Mr Peng noted that while square dancing is unlikely to reach the size and business value of marathons in China - there were more than 500 marathons organised across the country last year, each attracting a sponsorship of more than 5 million yuan (S$1 million) - the activity does have its own appeal.

He noted that the sponsorship amounts could rise in the future. China is presently home to the world's fastest-growing ageing population and 480 million people aged above 60 years old would account for about 35 per cent of the total population by 2050, local media reported. The number of square dancers then, should the sport continue to be just as popular, would naturally increase.

Although this sport is massively popular with middle-aged and elderly people, others have taken issue with square dancers hogging public areas and blaring loud music. Over the past several years, square dancing often made the news headlines for these reasons.

In March 2016, a man in Yangshuo, South China's Guangxi Zhuang autonomous region, was arrested for firing an air gun at a square dancer. According to the man, who claimed to be annoyed by the volume of the music, he was aiming at the loudspeaker but accidentally missed and hit the woman instead.

In June 2017, a group of square dancers with an average age of 63 were involved in a violent altercation with university students over the use of a public basketball court in Luoyang, Henan province.

China tells square dance aunties to stay away from cemeteries 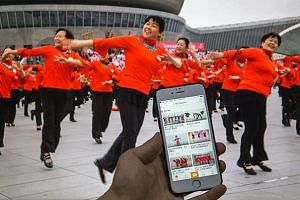 In November, the General Administration of Sport of China attempted to address the problems by issuing a regulation that banned square dancing in certain venues. It also urged dancers and sports administrators to work together to maintain societal harmony.

After interviewing 20 square dancers over the course of six months in 2013, Ms Wang wrote in her thesis, The Making of Guangchang Wu (square dancing) Stigma, that the activity has become the butt of the joke in many talk shows.

According to Ms Wang, many of the dancers belong to the "first generation mothers of single children" in the country who are lonely because they have only one child, or have husbands who are often away from home in search of money-making opportunities.

This description of square dancers rings true for Madam Yang - she lost her husband to diabetes in 2009 and has a son working in the military who is only allowed to return home every two months. Her daughter-in-law, who is a television producer, is also often not at home as she frequently travels for work.

Though Madam Yang does not dance with her team today - she stopped dancing five years ago after injuring her back - she still hardly takes care of her seven-year-old grandson. The boy is currently being cared for by his maternal grandparents.

"It seems that I have become too occupied with square dancing. My grandson needs to make an appointment weeks in advance before he is able to visit me. I have failed to be a good grandmother," she quipped.

"But every time we return home from a competition or a performance, my son, if he is around, would offer to pick me up from the airport or train station. And when we exit the gate and see families greet us with flowers and cheers regardless of the competition outcome, we feel like Olympic champions," she said.