TOKYO - In a strong sales pitch for Japanese companies to tap Singapore as a regional base, Senior Minister of State for Trade and Industry Sim Ann noted on Wednesday (Sept 28) the "complementary strengths" of both countries as centres for innovation.

Singapore has an "ecosystem of industry partners" to work with Japanese companies to develop new innovative products, she told about 360 business leaders at a business symposium co-organised by The Straits Times and Japanese media group Nikkei Business Publications to mark 50 years of bilateral ties.

Japanese skincare brand SK II is managed out of Singapore, she noted, with its new product extension for men, SK II Men, developed by working through Singapore firms.

Japanese information and communications technology firm NEC also led a consortium to take part in a test bed programme in Singapore to develop new public safety solutions in 2013, she said,

The Republic's second asset, Ms Sim said, is that it is a "microcosm of a highly-diversified Asia" near markets such as Asean, China and India. 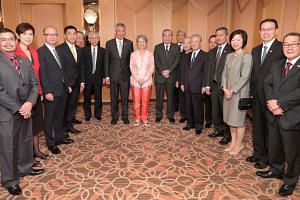 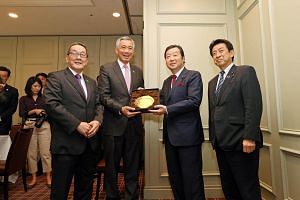 Singapore, Japan companies urged to collaborate on expanding into 3rd countries in South-east and South Asia

This was why Japanese pharmaceutical giant Takeda announced last year (2015) that it would be setting up its emerging markets business unit headquarters in Singapore. Yamato Asia - which runs the Ta-Q-Bin delivery service in Singapore - has also set up a centre in Singapore to perform regional market studies.

Ms Sim said that bilateral trade has increased by 80 times since diplomatic ties were established, while Japanese investments in Singapore have jumped 900 times since 1970.

"Conversely, Singapore companies' investments in Japan are diversifying from traditional sectors like real estate and logistics to new areas like healthcare, retail, and food and beverage services," she said.

Wednesday's session, themed Economic Partnership For Sustainable Growth And Social Innovation In Asean, is held to mark 50 years of bilateral ties between Singapore and Japan.

Prime Minister Lee Hsien Loong has been in Tokyo for a four-day official visit since Monday to also mark the occasion. He will meet his Japanese counterpart Shinzo Abe later on Wednesday.

At the same meeting, Singapore's late founding Prime Minister Lee Kuan Yew will be recognised with Japan's highest honour - the Grand Cordon of the Order of the Paulownia Flowers - for forging ties between the two countries for decades.

Speaking at the Straits Times-Nikkei symposium on Wednesday, Japan's parliamentary vice-minister for economy, trade and industry Toshinao Nakagawa and Ms Sim both noted that Japan and Singapore can collaborate towards the ratification and establishment of the Trans-Pacific Partnership (TPP) pact that involves 12 Pacific nations.

Mr Nakagawa also identified new technological areas including the Internet of Things (IoT) and automated driving in which both countries can collaborate.

Beyond strong economic ties, Ms Sim, who is also Senior Minister of State for Culture, Community and Youth, noted the deep people-to-people ties that have been made possible through frequent cultural exchanges.

For one thing, many Singaporeans have studied - or are studying - Japanese, a language that Ms Sim said she has studied for five years.

Food is another means of cultural exchange, with the 20,000 sq ft Japan Food Town launched in Wisma Atria shopping centre in July a "hit with many Singaporeans", Ms Sim said.

Singapore cuisine, too, has left its mark on Japan with Wee Nam Kee Chicken Rice and pastry chef Janice Wong setting up stores in the country, she added.