SEOUL (REUTERS) - South Korean President Moon Jae In said on Monday (Feb 26) the United States and North Korea should both give ground so they can sit down to talks to try to resolve the crisis over North Korea’s weapons programme, a day after Pyongyang expressed willingness for dialogue.

US President Donald Trump, who has been pushing a global sanctions campaign against North Korea to force it to give up development of nuclear missiles capable of hitting the United States, reiterated that he would like to have talks with Pyongyang, but only if the conditions were right.

“They want to talk. We want to talk also, only under the right conditions. Otherwise we’re not talking,” Trump said while hosting a meeting with state governors at the White House.

The United States has insisted that any future talks with North Korea must be aimed at that country’s denuclearisation, something Pyongyang has rejected.

South Korea has engaged in a flurry of talks with North Korean officials since January, hoping to use the South’s just-concluded Winter Olympics as a catalyst for rapprochement.

“Recently, North Korea has shown it is open to actively engaging the United States in talks and the United States is talking about the importance of dialogue,” Moon said during a meeting in Seoul with Chinese Vice-Premier Liu Yandong.

US would like talks with North Korea, but 'we'll see': Donald Trump

Trump and North Korean leader Kim Jong Un have exchanged bellicose taunts in the past year, raising fears of war, although the Trump administration has repeatedly said it prefers a diplomatic solution to the crisis.

On Friday, Washington announced its largest package of sanctions yet on North Korea, and Trump warned of a “phase two” that could be “very, very unfortunate for the world” if the steps did not work – an apparent reference to military options his administration says remain on the table.

North Korea condemned the new sanctions and accused Washington of trying to undermine the improvement in inter-Korean relations.

A high-level delegation from North Korea has been visiting Seoul and meeting South Korean officials, including Moon, after attending the Olympics’ closing ceremony on Sunday.

South Korea said the delegation told Moon that North Korea was open to talks with Washington. 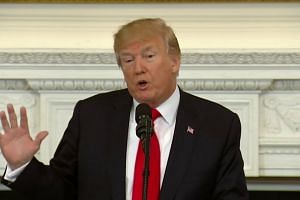 Kim Yong Chol has been accused by South Korea of being behind the sinking of a South Korean warship in 2010 that killed 46 sailors and has been the subject of protests since his visit was announced. North Korea has denied the allegations.

“Both sides agreed to work together for permanent peace on the Korean peninsula, sustainable relations between North and South Korea and balanced cooperation with the international society,” the South’s presidential office said in a statement.

Kim Yong Chol and his delegation will leave on Tuesday, just as North and South Korean officials gather on the North’s side of the Panmunjom truce village to discuss Pyongyang’s attendance at the Pyeongchang Winter Paralympics.

Hundreds of right-wing protesters gathered in central Seoul on Monday to criticize Moon and his administration for hosting the North Koreans, Kim Yong Chol in particular.

His visit has particularly enraged families of the sailors killed in the torpedo attack.