In speeches and television appearances, Mr Moon - who has held three summits this year with Mr Kim - portrayed the North Korean autocrat as a normal world leader who wants to bring economic prosperity to his people.

He made no mention of atrocities that prompted United States President Donald Trump to call North Korea a "cruel dictatorship" during his State of the Union address in January.

"You must have watched on the TV, but based on what I experienced, Kim Jong Un is young, very candid and polite, treating the elders with respect," Mr Moon told an audience at the Council on Foreign Relations.

"I believe that Kim Jong Un is sincere and he will abandon nuclear weapons in exchange of economic development."

Mr Moon is looking to convince sceptics in the US and around the world that North Korea is now serious about wanting to give up its nuclear weapons after decades of provocation and failing to deliver on promises.

"Moon knows Kim has not yet met US expectations and is worried about whether the US-North Korea process can get started and stay on track," said Mr Scott Snyder, a senior fellow for Korea Studies at the Council on Foreign Relations. 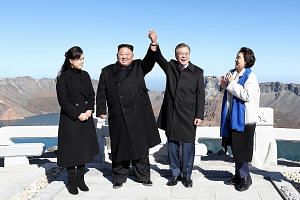 Besides preventing a war on the Korean peninsula, Mr Moon has a lot at stake politically: His approval rating rebounded after last week's summit, helping offset a recent drop due to a struggling economy.

Compared to last year, the general attitude towards North Korea at the UN General Assembly has shifted dramatically.

In 2017, North Korea had just completed its sixth nuclear test, and the Security Council imposed new sanctions against the North's provocation. Mr Trump called Mr Kim a "rocket man on a suicide mission".

This year, Mr Trump thanked Mr Kim for "his courage and the steps he has taken" in a much more subdued speech.

While North Korea's foreign minister is set to address the UN on Saturday, Mr Moon was already busy making the case for the country.

"Kim Jong Un said that he is well aware that a lot of people in the world still cannot trust North Korea or think North Korea is deceiving or trying to buy time, even after it took several steps to denuclearise," Mr Moon said.

"But what can North Korea gain from deceiving or buying time?" he said quoting Mr Kim.

The South Korean President is, more than likely, also targeting a more narrow audience, as Mr Stephen Noerper, senior director for policy at Korea Society, sees it, as Mr Moon's agenda involves another significant player on the world stage.

"I don't think of Moon as Kim's spokesperson, but rather a leader who realises he needs both Kim and Trump amenable to agreement," said Mr Noerper.

In Pyongyang last week, North Korea said it would dismantle its missile-test site and a launching pad in the presence of international experts. It added that it would be willing to take further steps to end its nuclear programmes such as closing its nuclear test site, if the US takes unspecified corresponding measures and honours the agreement signed in June at the first-ever summit between leaders of North Korea and the US.

Critics panned the latest agreement between the Koreas, saying it lacked any specifics and raised a host of questions.

While Mr Moon said it's "natural" to be suspicious of Mr Kim's motivation given the North's past failures to live up to its denuclearisation agreements, he added that this time it was "completely different".

"By live broadcasting all the process of the summit, I tried to have people around the world see Chairman Kim Jong Un and what kind of person he is with their eyes."