In a televised speech that came a day after his surprise second summit with Mr Kim, Mr Moon said the two of them agreed that the US-North Korea summit slated for June 12 in Singapore “must be successfully held”.

Mr Trump cancelled the talks last Thursday citing North Korean hostility. But he has since reinstated the summit, after North Korea backpedaled and issued a conciliatory statement on Friday.

Mr Moon said: “Chairman Kim made clear once again his intentions to completely denuclearise the Korean Peninsula... He expressed his willingness to work together to promote peace and prosperity as well as to put an end to the history of war and confrontation through the success of the North Korea-United States summit.”

During their two-hour meeting held at North Korea’s side of the truce village of Panmunjom, Mr Moon said Mr Kim agreed with him on the need to have direct communication with Washington to remove misunderstanding between them, and to have sufficient dialogue ahead of the June 12 summit.

What’s uncertain to Mr Kim is US intentions, according to Mr Moon.

“Mr Kim has firm intentions towards complete denuclearisation of the Korean Peninsula and he reiterated it yesterday (Saturday). What he’s uncertain about is whether Washington would end its hostile policy and guarantee the security of his regime after denuclearisation,” Mr Moon told reporters.

Mr Moon called for the opening of a hotline between Mr Kim and Mr Trump.

The South Korean President also voiced hopes to hold a trilateral meeting after the Trump-Kim summit in Singapore to discuss a formal end to the Korean War. The war was halted in 1953 by the signing of an armistice, which was never replaced with a peace treaty.

The two Korean leaders also “reconfirmed the need to accelerate the implementation” of the Panmunjom Declaration aimed at establishing a new era of peace and collaboration between the two countries. 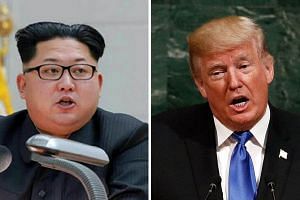 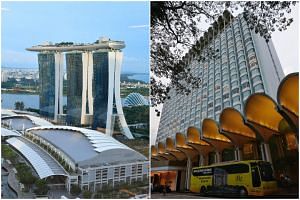 Mr Moon said high-level inter-Korea talks have been scheduled for June 1, and both sides will also hold military talks and Red Cross talks to discuss holding a reunion for families separated by war.

The two leaders met for the second time in a month on Saturday after their historic meeting on April 27 sealed the Panmunjom Declaration promising a new era of peace and collaboration between the two Koreas.

The second meeting, he noted, was like one “between friends” and they had a “candid, heart-to-heart conversation”.

Mr Moon also stressed the importance of the two Koreas engaging in more of such direct communication, and that they agreed to meet and talk in person whenever necessary.

Shortly before Mr Moon’s speech, Mr Trump finally announced that the June 12 summit “has not changed”.

This, coupled with North Korea backtracking on its bellicose style, gave rise to “great expectations” that the June 12 summit will still take place, Prof Song said on Arirang TV.