SEOUL - South Korea's Constitutional Court has rejected for the fourth time an appeal challenging a controversial century-old law that restricts the awarding of massage licences to the visually impaired, reported Yonhap news agency on Tuesday (Jan 2).

The Constitutional Court ruled that professional massage services should be the preserve of the blind as they have fewer job options.

The ruling marked the fourth time that the court has rejected an appeal challenging the medical law that allows only visually impaired people to win massage licences and open massage shops, and calls for up to five years in prison or 50 million won (S$62,500) in fines for anyone who violates the law.

In the latest case, a massage shop owner filed the petition after being charged with offering massage services without a licence in 2015, arguing that the current law infringes on the occupational freedom of people who are not blind.

But the Constitutional Court rejected the claim, reported Yonhap. 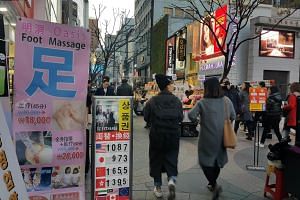 The court also said that those who are not blind should continue to be banned from opening massage shops because allowing them to open such shops can result in poor conditions for the blind.

The court has delivered similar verdicts in 2008 and 2013 in a string of challenges to a law that was first introduced in Korea by Japanese colonialists in 1913.

South Korea's Health Ministry said recently that there are only 1,300 legal massage parlours hiring 9,742 licensed blind masseuses in the country.

But they make up only a small percentage of the total population of masseuses, as illegal massage parlours, many hiring from China and Thailand, dominate the market.