SEOUL (AFP) - Chinese tourist numbers to South Korea continued to decline in December, figures showed Monday (Jan 22), even though Beijing and Seoul pledged to improve relations strained by a US missile defence system.

Beijing saw it as a threat to its own security and reacted furiously, imposing a string of measures on South Korean businesses and banning group tours to the South, in moves seen as economic retaliation.

The ban on tour groups hit the South Korean travel and retail industries hard, with Chinese visitors renowned for shopping trips to their neighbour.

Some of Beijing's restrictions on tours appeared to have been lifted after the two countries issued identically-worded statements in October on their mutual desire to improve relations.

But the number of Chinese visitors to the South continued to tumble in December, Korea Tourism Organisation statistics showed Monday.

A total of 332,474 Chinese travellers came to South Korea last month, down 37.9 per cent from the previous year, it said.

It was only a marginal improvement on the 42.1 per cent fall seen in November and 49.3 per cent in October. 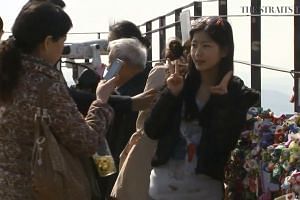 Chinese tourists trickling back to South Korea, but experts say time is needed to rebuild trust

But non-Chinese arrivals were unchanged at 9.2 million.

China is the South's top trading partner and the diplomatic row took a major toll on many South Korean firms - most notably retail giant Lotte Group, which provided the land to host Thaad.

Angry boycott campaigns and regulatory crackdowns by Chinese authorities decimated its business in the world's second-largest economy, and it was forced to put its supermarket unit in China up for sale.

President Moon Jae In visited Beijing for a summit with his Chinese counterpart Xi Jinping in December.