South Korean voters go to the polls on Tuesday (May 9) to elect a new president, ending months of political turmoil caused by the impeachment of the country's first female head of state.

The election, originally slated for December, was brought forward by former president Park Geun Hye's corruption and influence-peddling scandal that triggered months of candlelight protests. She has been arrested and will face charges including extortion and abuse of power.

Park's downfall has fuelled resentment against the country's traditional elite and will likely propel her former rival in the 2012 race into the presidential Blue House.

Mr Moon Jae In from the liberal Democratic Party is the clear front runner this time. Save for a major upset, he is widely expected to win.

Mr Moon cast his vote with his wife at a polling station in Seoul, early Tuesday. Speaking to reporters after casting his ballot, he said had “given the campaign his all” and called on his supporters to vote. Mr Moon was also seen posing for selfies with some of his supporters after.

Meanwhile, Mr Ahn cast his ballot in northern Seoul, where he appeared at a polling station together with his wife and daughter. He said later he would wait for the people’s “wise decision”.

Other candidates were also seen casting their ballots.

On Monday, the various candidates travelled far and wide on their last attempt to reach out to voters. 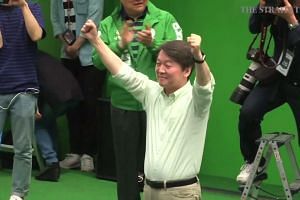 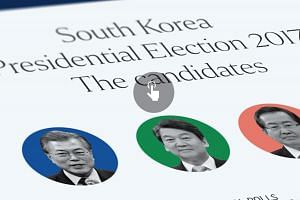 Interactive: Who will be South Korea's next president?

Mr Moon, who travelled to conservative strongholds in Busan and Daegu before returning to Seoul, called for "unified support" so he could overcome the country's security, economic and diplomatic crisis.

About 11 million people have already cast their ballot over a two-day early voting period last week. The rest of about 31 million people can make their choice from 6am local (5am Singapore) onwards at 13,964 polling stations nationwide.

"I hope our new president will unite our country and fight corruption, which many Koreans especially the young ones, are frustrated about," computer programmer Kim Dong Gun, 34, told The Straits Times.

More than half of South Koreans had voted in the election by 2pm, the National Election Commission said, with voter turnout expected to hit a record high of over 80 per cent.

Whoever wins will have to take office immediately, with no transition period given.

Analysts say the new leader will face numerous hurdles in trying to restore faith in the people, implement much-needed reforms to revitalise the sluggish economy and create jobs, and rebuild ties with South Korea's neighbours and the big powers.

Mr Moon, if elected, is expected to soften the hardline stance against North Korea maintained by the conservatives in the past decade.

The former aide to progressive president Roh Moo Hyun has also pledged to seek more independence from South Korea's security ally United States, and review the hasty deployment of a US missile shield that has driven China to hit back at Korea's tourism and entertainment sectors.

Dr Katharine Moon from the Washington-based think tank Brookings Institution said it would be in Mr Moon's favour to "get along, at least on the surface, with Trump".

"At the same time, Korea must mend fences with Japan and China (and build) stable relationships as defence against unpredictable moves by the Trump administration," she added.