SEOUL (AFP) - South Korean President Moon Jae-in's approval rating has dipped below 50 per cent for the first time, a poll showed on Thursday (Nov 29), as economic hardship bites and concerns rise over a rapid drive towards reconciliation with the North.

Mr Moon's popularity hovered near 80 per cent in May - an all-time high for any South Korean president at the end of their first year in office - in the wake of a landmark summit with North Korean leader Kim Jong Un.

But it tumbled to 48.8 per cent in a Realmeter survey of 1,508 people carried out this week, extending a downward trend for the ninth week running.

"Expectations for economic recovery have plunged as economic indicators such as unemployment and investment remain sluggish," it added.

Realmeter said stalled nuclear talks between the United States and North Korea also fuelled negative views of Mr Moon as concerns rise that he may be going too fast in his reconciliation drive with Pyongyang. 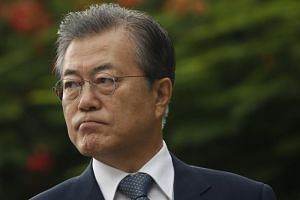 Mr Moon took office in May 2017 after his predecessor Park Geun-hye was impeached over a nationwide corruption scandal, and had enjoyed high public support with his open, down-to-earth image.

The approval rating of Mr Moon's ruling Democratic Party also slipped for the ninth week to 37.6 per cent - the lowest in nearly two years - while support for the main opposition Liberty Korea Party rose to 26.2 per cent.