SEOUL (AP, KYODO) - South Korean President Moon Jae-in on Thursday (Aug 15) offered an olive branch to Japan to end a tense trade dispute, saying that Seoul will "gladly join hands" if Tokyo to accepts calls to resolve it through dialogue.

Mr Moon's speech at a ceremony marking the 74th anniversary of Korea's liberation from Japanese colonial rule at the end of World War II come amid heightened public anger over Tokyo's recent moves to impose trade curbs on South Korea, which triggered a full-blown diplomatic row.

On Thursday, Japan said it has asked South Korea for further explanations of why it will be removed from a list of countries entitled to preferential treatment in trade.

“The reasoning and details are not clear so we have been seeking further explanations from South Korea,” Industry Minister Hiroshige Seko said at a press conference.

But Mr Seko said Japan is not planning to seek bilateral negotiations, adding: “It’s not something that can be decided or changed through consultations.”

South Korea plans to remove Japan around September from its list of 29 nations that have an expedited application process for exports, placing it in a newly created category. Seoul has said it is open to consultations if requested by Tokyo, while seeking the public’s views before the change takes effect.

Bilateral tensions over trade have spiked in recent months and South Korea’s move comes as Japan, for security reasons, will take South Korea off its list of nations with preferential status that can buy products that could be diverted for military use.

Tokyo has already tightened its export controls on some materials used in making chips and displays for smartphones and televisions.

Tokyo's measures struck a nerve in South Korea, where many people still harbour strong resentment over Japan's ruthless colonial rule of the Korean peninsula from 1910 to 1945.

After threatening stern counter-measures and declaring that South Korea would "never lose" to Japan again, Mr Moon took a more conciliatory tone over the past week amid relief in Seoul that the impact of Japan's trade measures may not be as bad as initially thought.

There has also been concerns that the government's nationalistic calls for unity - in the face of what Mr Moon previously described as an unprecedented crisis - were allowing public anger towards Japan to reach dangerous levels. 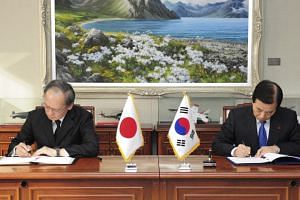 Japan 'in the dark' over South Korea trade controls: Minister

"If a country weaponises a sector where it has a comparative advantage, the order of peaceful free trade inevitably suffers," Mr Moon said at the ceremony at the Independence Hall in the city of Cheonan. "A country that accomplished growth first must not kick the ladder away while others are following in its footsteps."

He continued: "If Japan, better late than never, chooses the path of dialogue and cooperation, we will gladly join hands."

South Korea's trade row with Japan came amid worsening bilateral relations with North Korea, which has been ignoring Seoul's calls for dialogues and tested a slew of new short-range weapons in recent weeks that potentially expands its abilities targets throughout the South, including US military bases there.

Experts say the North's recent launches are aimed at building leverage ahead of the resumption of nuclear negotiations with the United States, which have stalled in recent months, and also dialling up pressure on Seoul to coax major concessions from Washington on its behalf.

"In spite of a series of worrying actions taken by North Korea recently, the momentum for dialogue remains unshaken, which is a significant result of my government's peace process on the Korean peninsula," Mr Moon said.

"Now is the time for both Koreas and the United States to focus on resuming working-level negotiations between Pyongyang and Washington at the earliest possible date."

Meanwhile, tens of thousands of South Koreans are expected to march in anti-Japan protests planned throughout Thursday.