In its editorial notes on Dec 29, the paper says that the South Korea government must weigh its credibility as a nation, related to the 'comfort women' accord.

SEOUL (THE KOREA HERALD/ASAIA NEWS NETWORK) - The issue of South Korea's former "comfort women" forced into sexual slavery for Japan's wartime army during its colonial domination of Korea has come to the spotlight with the release of a panel report on negotiations leading up to a deal with Japan on the matter.

President Moon Jae In said on Thursday (Dec 28) that the issue cannot be settled with the deal, which the panel identified as containing problems, though the accord is an official promise between the two governments.

He also said addressing the issue was unavoidable.

The Moon administration must draw follow-up measures as soon as possible from the perspectives of the victims and push for internationally acceptable diplomatic solutions.

In addressing the problems, it must consider the international credibility of South Korea as a country of its word, too.

The panel unveiled a report on Wednesday that shed light on problems in terms of content and procedures regarding the deal made by the previous government under then President Park Geun Hye.

It revealed an "undisclosed part" in the agreement announced on Dec 28, 2015: South Korea promised to make efforts to persuade comfort women advocacy groups and properly resolve the issue of relocating a statue set up in front of the Japanese Embassy in Seoul. 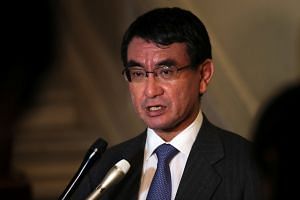 It also secretly agreed to stop funding overseas statues and monuments memorialising comfort women and not to officially call the victims "sex slaves".

The task force cited the controversial expression "a final and irrevocable settlement" as one of the major factors that biased the deal in Japan's favour.

The panel found the Park administration did not inform former comfort women of key points of the accord, such as a final and irreversible settlement and a promise to restrain criticisms over the issue on an international stage.

There is no question that there are problems with the agreement.

When considering them, it is not hard to understand why public sentiment for scrapping the deal has not subsided even though two years have passed since the deal was concluded.

On the campaign trail, Moon vowed to seek renegotiation. Other major presidential candidates also argued the deal should be renegotiated or tossed out.

The Korean Council for the Women Drafted for Military Sexual Slavery by Japan has insisted that the government should seek to invalidate the accord.

But the government has not mentioned scrapping or renegotiating it to avoid being branded internationally as an unreliable country that breaks diplomatic agreements unilaterally.

It could not neglect the reality of Korea-Japan ties and various issues, especially their joint responses to North Korean threats.

Japanese Foreign Minister Taro Kono said on Wednesday any attempt to revise the agreement would be unacceptable and make relations unmanageable.

It is not right for the Japanese government to make such threatening remarks when its words and deeds after the deal belie its spirit.

Tokyo recalled its Japanese ambassador in protest against a comfort woman statue installed in front of a Japanese consulate in Busan. This is not an act in line with a sincere apology.

The essence of the comfort women issue lies in the restoration of the victims' honour and decency as manifested in the deal.

But the Japanese government acted as if its wrongs have disappeared because it offered money under the deal.

The Moon government should point out Japan's attitude in a dignified manner. It should urge the Japanese government to restrain right-wing nationalists from insulting Korea and former Korean comfort women.

The former comfort women pose an issue that should not be forgotten, while international confidence in South Korea as a country of its word is another important matter.

It is wise to keep the positive parts as they are while seeking to modify the problematic portions.

Contradictory as it may sound, the government must seek to rectify the deal as well as strengthen relations with Japan over common issues.