The accident happened around 4.30pm (Korea time) in the upscale Gangnam district.

Kim, who is known for television dramas including Lovers in Prague, was driving alone in a black Mercedes-Benz sports utility vehicle when he hit a Hyundai sedan car in front of him.

His SUV then swerved and crashed into a nearby apartment building and plunged down a flight of stairs, landing on its right side. Smoke was seen coming out of his vehicle.

The Hyundai driver was quoted as saying that Kim grabbed his chest in pain.

The actor was rescued by firefighters and sent to Konkuk University Medical Center, but eventually succumbed to his injuries. 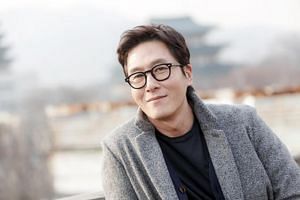 Police are investigating the case. The accident site is reportedly a three-minute drive away from his house.

News of Kim's death emerged around 6pm, sending shockwaves throughout the country.

His actress girlfriend Lee Yoo Young, 27, was in Busan filming an episode of the popular variety show Running Man when she heard the news. She immediately rushed back to Seoul, according to reports.

Events were also cancelled out of respect for the veteran actor, including the VIP screening of new movie The Bros.

Kim, who was once a regular member on the popular travel variety show 2 Days & 1 Night, made his acting debut in 1998. He has starred in movies including My Wife Got Married and dramas like Reply 1998 and Hur Jun, The Original Story.