BEIJING - North Korean leader Kim Jong Un is believed to have visited Beijing over the last two days ahead of crucial summits between Mr Kim and the leaders of South Korea and the United States.

If Mr Kim did visit Beijing and meet Chinese President Xi Jinping, their summit would have come at a time when China is in danger of being sidelined on the Korean peninsula nuclear issue.

Tensions have heightened in the past several months on the peninsula as Pyongyang conducted nuclear and missile tests despite ever heavier sanctions and strong words from US President Donald Trump, who had threatened “fire and fury” against North Korea.

However, tensions eased after North Korea took part in the Winter Olympics in South Korea in February and Mr Kim and South Korean President Moon Jae In are set to meet in April. Mr Trump has said he would like to meet Mr Kim in May.

These meetings could set in motion denuclearisation talks which exclude China. Beijing always has seen itself as an interested party in such talks.

The Chinese capital was thick with speculation about the visit after Japanese news agency Kyodo reported on Monday (March 26) that a train that may be carrying Mr Kim had passed through the border between the two countries at the north-eastern Chinese city of Dandong.

Japanese broadcaster Nippon TV showed footage of a green train, similar to the one used for foreign visits by Mr Kim’s late father, Kim Jong Il, arriving on the same day at Beijing Station and being met by a military honour guard and a convoy of black limousines, according to wire agencies.

Motorcades were seen entering and leaving the Diaoyutai Guesthouse, where visiting foreign dignitaries are often billeted, on Monday and Tuesday (March 27).

Kyodo on Tuesday reported that a train “believed to be carrying a high-ranking North Korean official” departed Beijing station at around 3pm.

Mr Kim’s visit, if confirmed, would mark his first trip abroad since coming to power in 2011. 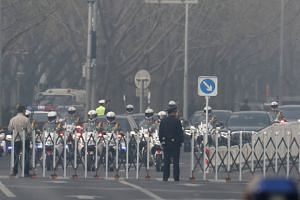 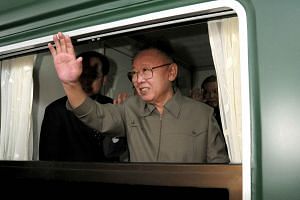 Asked about it at a regular briefing, Chinese foreign ministry spokesman Hua Chunying said: “I’m not aware of any information at present. When we have the information, we will release it in due course.”

If it was Mr Kim, it should be no surprise that Beijing chose to summon him now, said American China-watcher Gordon Chang.

Writing on the National Interest magazine website, he said that Beijing was on the verge of being shut out of the discussions Mr Kim would soon hold with Mr Moon and, possibly, Mr Trump.

However, Chinese analyst Jia Qingguo of Peking University says both China and North Korea have their reasons to meet at this time.

“North Korea under current circumstances needs to seek China’s help. If it were to give up its nuclear weapons, it would need China’s help to provide protection and to guarantee its security,” he said.

Economically, the North would also need China, together with other countries, for aid and markets.

“Even if it doesn’t want to give up its nuclear weapons, it hopes to make use of the contradiction between China and the US to get China to ease off its sanctions,” he said, adding that this would allow Pyongyang to continue with its nuclear weapons programme.

China, a close ally of the North, had in recent months imposed heavier sanctions on North Korea, a move that soured ties with Pyongyang.

China, for its part, wants to improve ties with North Korea, said Professor Jia. Noting that China-US ties had continued to deteriorate under Mr Trump’s hardline policy towards Beijing, he said strengthening ties and cooperation with Pyongyang has become more important to Beijing.