SEOUL  - South Korean President Moon Jae-in wants another summit with North Korean leader Kim Jong Un as soon as the North is ready, regardless of where and how, so as to advance nuclear talks that have stalled between Pyongyang and Washington.

“The peace process on the Korean Peninsula has now entered the stage where the discussions held at the Hanoi Summit need to be developed and translated into substantive progress at the next level,” Mr Moon said on Monday  (April 15), referring to the February summit between Mr Kim and United States President Donald Trump.

“Now is the time to begin the preparations in earnest for an inter-Korean summit,” he told close aides in a meeting, noting how Mr Kim has also expressed willingness to continue dialogue in a policy speech last Friday.

Local reports said the South Korean leader is planning to send a special envoy to Pyongyang in the near future to lay the groundwork for another round of cross-border talks.

This would mark the fourth summit between the two leaders, since they first met in the truce village of Panmunjom in April last year.

Mr Moon’s remarks came after he returned from a trip to Washington last week to meet Mr Trump.

Both Mr Trump and Mr Kim have said they are open to holding a third summit - after their second meeting in Hanoi failed to produce any agreement. They first met in Singapore last June.

Mr Moon, who has played the role of mediator between the US and North Korea, said he exchanged extensive views last week with Mr Trump and key officials in the Trump administration, including Secretary of State Mike Pompeo and national security advisor John Bolton.

The two countries “reaffirmed the common goals of achieving complete denuclearisation and establishing permanent peace on the Korean Peninsula through a diplomatic solution, and also resolved to work together to resume the dialogue between Washington and Pyongyang in the near future”, said Mr Moon.

The South Korean leader also pledged to steadily implement inter-Korea agreements signed with the North last year, such as to improve ties, reduce military tension, and work towards complete denuclearisation of the Korean peninsula, even in the face of obstacles. 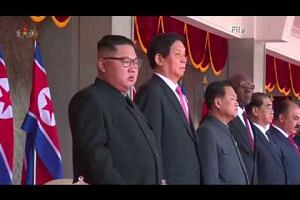 Mr Kim had accepted an invitation from Mr Moon to visit Seoul when they last met in Pyongyang last September, but has yet to do so given a lack of progress on the nuclear front.

The Hanoi summit broke down over US demands for something bigger than the North’s offer to dismantle its main Yongbyon nuclear facility.

Mr Trump said North Korea wanted all sanctions lifted, but the regime insisted that it only asked for a partial removal of sanctions that hurt its people’s livelihood. Both sides have not made much contact since then.

Washington has maintained that sanctions against the North will stay in place until it abandons nuclear weapons, but Mr Trump has also expressed openness towards “various small deals”.

Mr Kim, apparently frustrated by American attitudes in Hanoi, has urged the US to “quit its current calculation method and approach us with a new one”.

Eager to broker more talks, Mr Moon told his aides on Monday: “As I have been doing all along, I will spare no effort to ensure that the upcoming inter-Korean summit becomes a stepping stone for an even bigger opportunity and a more significant outcome.”

Peace on the Korean Peninsula “is a matter of survival for us” and is “inseparable from not only the lives and safety of the Korean people, but also the economy”, he said.

“We will fully carry out our duty of establishing peace on the Korean Peninsula by creating a virtuous cycle between inter-Korean and US-North Korea relations and securing the international community’s support and strengthening its cooperation.”