SEOUL (AFP) - Musicians from North Korea and South Korea held hands, sang and cried together at a rare concert held in Pyongyang that ended with an emotional standing ovation by thousands of spectators.

The South Korean pop stars returned home on Wednesday (April 4) after two concerts in the North's capital this week, the first of which was attended by leader Kim Jong Un who said he was deeply moved by their performance.

Their visit, part of a cultural charm offensive by Seoul, comes as a diplomatic thaw gathers pace on the peninsula ahead of a landmark inter-Korean summit this month.

"The performers sang of the ardent desire of the fellow countrymen for national reunification hands in hands," reported the North's official KCNA agency.

The joint concert stirred the audience as those present "overflowed with compatriotic and warm feelings", KCNA said.

Mr Kim, who made a surprise appearance with his wife at the first concert, did not attend Tuesday's performance. 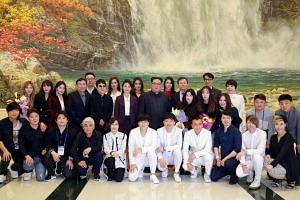 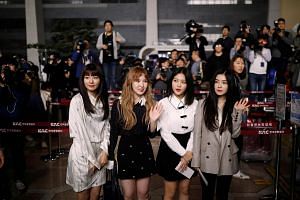 His high-profile appearance at the earlier concert was unusual as his authoritarian regime typically struggles to prevent any infiltration of the South's pop culture.

Mr Kim even met and joked with Red Velvet, a K-pop girl band, about the high levels of interest in the South about his attendance.

The girl group's performance of hit song Red Flavour on Tuesday appeared too much for the North Korean audience, however, which was subdued throughout a provocative display, according to South Korean pool reports.

The stadium also reacted enthusiastically when female singers from the two countries jointly performed Paektu And Halla Are My Fatherland, a patriotic North Korean song about reunification.

The show culminated with all the musicians joining together to sing the North's See You Again and the common Korean children's song Our Wish Is Reunification, prompting a standing ovation that lasted more than 10 minutes.

"I think the performance was a success," said Ms Hyon Song Wol, head of the North's art troupe, after the show.

"The South Korean singers did really well without any mistake even though they had only half a day to practise," Ms Hyon said.

The rapprochement on the peninsula began with the South's Winter Olympics, to which the North's Mr Kim sent athletes, cheerleaders and his sister as an envoy.

An inter-Korean summit will be held on April 27. No date has been set for a planned United States-North Korean summit although it is expected before the end of May.