The official added Chung had already spoken to McMaster on the phone shortly after completing the visit to North Korea.

The South Korean envoys are expected to brief US officials on North Korea's stance regarding possible future talks with Washington and its apparent willingness to suspend nuclear tests if the security of the North's regime is secured.

Tensions last year rose to the highest level in years over North Korea's nuclear and missile programmes, which it pursues in defiance of UN Security Council resolutions, with shrill, bellicose rhetoric coming from both Kim Jong Un and Trump.

North Korea has boasted of its plans to develop a nuclear-tipped missile capable of reaching the mainland United States. But fears of all-out war eased last month, coinciding with North Korea's participation in the Winter Olympics in the South.

Earlier this week, Chung and Suh were part of a delegation that traveled to Pyongyang in the first encounter between South Korean government officials and Kim Jong Un, where the North Korean leader expressed he was open to denuclearisation talks with the United States. 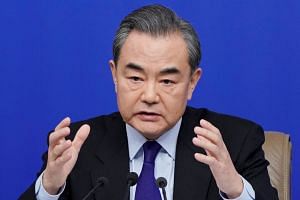 NPC 2018: China calls on US and North Korea to have talks as soon as possible

They also agreed the two Koreas would hold their first summit in over a decade in late April. South Korean President Moon Jae-in has said sanctions should not be eased for the sake of talks and that nothing less than denuclearisation of North Korea should be the final goal for talks.

A senior US administration official said on Thursday that no decision on the possibility of the United States joining a summit of North and South Korea was expected to be made at this week's meeting with McMaster. Those discussions will be conducted in private among US officials, the source said.

After returning from the United States, Chung will visit China and Russia, while Suh, the head of South Korea's intelligence agency, will head to Japan to brief officials.