SEOUL (THE KOREA HERALD/ASIA NEWS NETWORK) - With criticism mounting over a visit by North Korea's former spymaster, who is suspected of having orchestrated attacks on South Korea, Seoul's defence chief confirmed on Wednesday (Feb 28) that Mr Kim Yong Chol's organisation was behind the sinking of a South Korean warship in 2010.

But the minister declined to say whether there is clear evidence linking the attack to Mr Kim, who visited South Korea to attend the closing ceremony of the Pyeongchang Olympics.

Mr Kim was head of the Reconnaissance General Bureau in March 2010 when the South Korean warship was attacked.

"We can speculate about things in North Korea, but it's impossible to confirm exactly what happened inside," said Mr Song during an emergency parliamentary inquiry at the National Assembly's National Defence Committee.

Led by South Korea and the US, a multinational investigation team concluded that the Cheonan was sunk by a torpedo launched by a North Korean Yeono-class submarine.

The attack claimed the lives of 46 sailors and one naval warrant officer, who lost his life during the rescue operation. 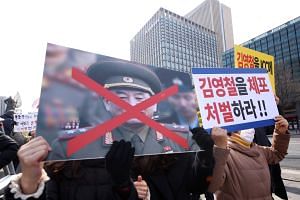 South Korea's top spy agency, the National Intelligence Service (NIS), said last week that it is difficult to pinpoint the blame for the Cheonan sinking on Mr Kim, saying further confirmation is needed to determine whether he gave direct orders to attack the warship.

Mr Song, meanwhile, refuted the accusation that Mr Kim and his delegates had travelled to Seoul via a road inside a restricted military area and that the Defence Ministry had been sidelined when the decision was made on that travel route.

"I watched the video (of Mr Kim's trip to Seoul) and received an explanation that the area was not problematic," said Mr Song. "I don't agree with the view that the Defense Ministry was passed over... I'm being briefed on everything."

When travelling to South Korea on Sunday for a three-day visit, Mr Kim and his delegation took a detour to avoid a sit-in protest by opposition lawmakers, who demanded accountability for his alleged role in the Cheonan sinking.