LONDON (CHINA DAILY/ASIA NEWS NETWORK) - A number of universities in Britain are standing by Chinese tech giant Huawei despite doubts raised by other Western bodies including the United Nations and Nato over security concerns.

Several organisations in Britain, including Oxford University and Prince Charles's personal charity the Prince's Trust, have severed ties with the technology company recently.

However, University of Edinburgh and Edinburgh Napier University, which both have teaching and research partnerships with Huawei, and Police Scotland, which uses the company's broadband devices, have rejected concerns around the security of Huawei products.

Huawei makes equipment including base stations, switches and routers, as well as consumer products such as smartphones, but there has been concern from some Western nations that the Chinese government could use Huawei's technology for espionage, an allegation the company has rejected. The Chinese government also repeatedly denied the allegation.

"We use mobile Internet devices by the manufacturer Huawei with the Internet service provided by Vodafone," said Police Scotland.

"This service does not directly connect to our network. While BT carries out its work to remove Huawei products, Police Scotland will follow a well-established process to ensure any impact is kept to a minimum." 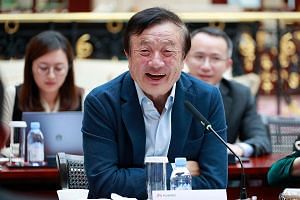 Huawei has partnered with a number of British universities on academic research in recent years.

The University of Edinburgh has received £5.1 million (S$9 million) in its partnership with the tech company for a laboratory dedicated to researching data management and processing.

"As with any research partnership that we undertake, this has undergone a rigorous process of due diligence and is the result of long-term collaboration between experts at the University of Edinburgh and Huawei," said a university spokesman.

Edinburgh Napier University, which collaborates with Huawei in information and communications technology, added: "Our relationship with Huawei Technologies is focused on teaching programmes rather than research projects."

The Scottish universities are not the only institutions who are standing by the tech company for the time being.

Huawei has also made sizeable donations to the University of Surrey's 5G Innovation Centre. The university told City AM newspaper: "Huawei is one of a number of key partners, industrial, academic and government, with whom we are working to develop 5G capabilities. We're committed to continuing our research, pushing the frontiers of human knowledge. We will continue to work with all our research partners, including Huawei, unless there are clear and compelling reasons not to."

Huawei has also put more than £850,000 into projects at the University of Southampton, such as development of innovative consumer 3D technologies. The company also sends undergraduates to its headquarters in Shenzhen as part of its Seeds for the Future programme.

Elsewhere, the company has invested £90 million in the University of Manchester's National Graphene Institute.

The university said: "We have a range of relationships with corporate business partners. These are not necessarily donations, but may be business development projects or research collaborations. We have no plans to change our relationship with Huawei but will monitor developments."

The University of York also said there are no plans to make changes to its research project at the moment, while famed engineering school Imperial College London, where Huawei funds a data science innovation lab, said it will continue to work with the company but insisted reviews would take place at "appropriate times".

Cardiff University admitted it was "monitoring the current situation" but would continue to work on the current agreed projects. "Any new commercial research contracts with new or existing sponsors would be subject to the University's established due diligence processes," the university added.

Huawei has also invested more than £1 million in a computer lab at Cambridge University, and is involved with Queen Mary University London, the Royal College of Art, King's College London, Barking and Dagenham College, Henley Business School and the Birmingham City University school of computing.