SEOUL - A sociopath. An ex-convict. A transgender. A high school dropout. And a guy of half Korean, half African descent.

These characters come together in Itaewon Class, a South Korean drama that celebrates diversity and the underdogs in a country widely seen as homogenous, conservative and conformist.

Set against the backdrop of Seoul's "most international" neighbourhood of Itaewon, the drama has won praise for its realistic portrayal of subjects such as prejudice against foreigners, misbehaving scions of the chaebol (Korean for conglomerate), and discrimination against the lesbian, gay, bisexual and transgender (LGBT) community.

Itaewon Class just ended its run at home last Saturday (Mar 21) with a rating of 16.5 per cent for its finale, making it the second most watched drama on cable channel JTBC, after Sky Castle. It is the top-ranked drama on Netflix in both South Korea and Singapore.

Actor Park Seo-joon plays the main character Saeroyi, a high-school dropout and ex-convict, who opens a pub in Itaewon in hopes of beating his enemy - the founder of a food conglomerate whose arrogant son caused Saeroyi's expulsion from high school and killed his father in a car accident.

In real life, chaebol scions have got into trouble for drink-driving, assault, smuggling drugs, and flying into a rage over how nuts are served on a flight.

In the drama, Saeroyi ends up hiring four other people - a former cellmate, a transgender, a sociopath, and a biracial man - to help him in his journey to become a successful businessman.

JoongAng Ilbo newspaper described Saeroyi as a typical heuksujeo (Korean for mud spoon) , referring to someone who struggles to make ends meet as he lacks rich and powerful parents with connections in high places.

"The fact that he still manages to succeed gives viewers a sense of catharsis," it added.

Culture critic Jeong Duk-hyun said the drama, which is based on a popular webtoon, shows how the younger generation are pursuing their own future based on their own standards. He added that it is "refreshing" to see how the main characters manage to turn social pressure and difficulties around.

Itaewon provides the perfect setting for the drama to unfold. 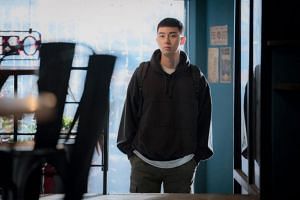 Once a booming town due to the presence of a United States army base, which has since moved out, Itaewon is now known for its melting pot of restaurants serving all kinds of international cuisine and vibrant nightlife.

There is a row of gay bars and dance clubs.

Itaewon is also home to many foreigners residing in Seoul, with some 40 embassies based in the area. About two million foreigners live in South Korea, accounting for four per cent of the 50 million population.

The foreigners in Itaewon create an exotic ambience, said Ms Shim Bong-soon, 55, who runs a business in the area. "People visit Itaewon because they think Itaewon is exotic," she told The Sunday Times.

Prejudice against foreigners, which experts attribute to a lack of awareness and exposure among Koreans, is among the once-taboo topics tackled in the drama.

For instance, Koreans assume foreigners in their country speak English. But, in the drama, Toni Kim, who is half Korean and half Guinean, always has to explain why he only speaks Korean and French, not English. His story brings to mind Korean-Nigerian model Han Hyun-min, who grew up in Itaewon and does not speak English.

Toni also gets turned away from a bar due to his skin colour - a complaint among foreigners in real life that has persisted despite efforts by the National Human Rights Commission of Korea to change public perception. There are no laws against discrimination here.

Cross cultural marriages are also frowned upon in South Korea - which is reflected in the drama.

The inclusion of a transgender chef, who is saving up money for sex reassignment surgery, is also deemed a timely reflection of attitudes towards them in real life.

Transgenders made the news in the country recently when one withdrew from Sookmyung Women's University after getting flak for enrolling in the prestigious school, while another was discharged from the army after undergoing sex reassignment surgery.

"From transgender to ex-convicts, sociopath and single mum, it was really interesting to see all these characters in the same drama. Isn't this how our society is like now?" she said.