CHENGDU (Sichuan) - A major business park in south-western Chengdu, jointly developed by Singapore companies and their counterparts in the Chinese province of Sichuan, is set to welcome its first batch of small and medium-sized firms by early next year.

Positioned as a high-end industrial and residential township, the Singapore-Sichuan Hi-Tech Innovation Park (SSCIP) has attracted more than 33.9 billion yuan ($6.8 billion) in investments.

Some 34 information communication technology and life sciences companies have acquired land to build their regional headquarters and research and development facilities, with 20 already embarking on construction.

Two other projects - the Artificial Intelligence (AI) Innovation Centre and the Life Science Incubation Park - are slated to be completed and up and running by the end of this month.

"Many technology companies, or foreign companies from Singapore, Europe or the United States, are quite unwilling to acquire their own land to build their own buildings. They prefer to lease," said Mr Richard Liu, chief executive of SSCIP's development company.

The AI Innovation Centre and the Life Science Incubation Park, with a floor area of 800,000 sq m, have been built to cater to these companies.

"All the office spaces have been fully taken up. About 80 per cent of the companies are from the major first-tier cities - Beijing, Shanghai, Guangzhou and Shenzhen - while the remaining 20 per cent are European and American firms," said Mr Liu. 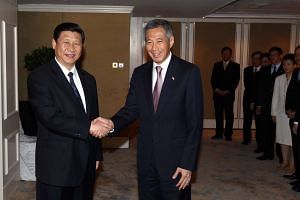 Singapore-China ties: 7 things to know about 25 years of diplomatic relations

Renovations can start next month and, by early next year, the companies could start operations, he added.

Mr Liu told The Straits Times the development company planned to take up an entire block with 28,000 sq m of office space in the AI Innovation Centre to set up a Singapore Innovation Centre.

"Our thinking is to bring Singapore companies or local companies doing business with Singapore to this centre," said Mr Liu.

"Most Singapore companies prefer to be located in the same place. We hope to bring all companies related to Singapore all under one roof, whether they are in consulting, finance, services or design. This can help make it easier for them to communicate and exchange information," he added.

He also hopes to use the centre as a platform to provide more information to Singapore companies to help facilitate their investments into Chengdu.

The SSCIP is one of several private sector-led, government supported projects that Singapore has in China. The others include Guangzhou Knowledge City in the south and the Jilin Food Zone in the north-east.

A joint venture company was formed by Chinese state-owned Chengdu Hi-tech Investment Group and Singapore's Sembcorp Development and Ascendas-Singbridge for the masterplanning of the SSCIP, its investment promotion as well as the building of infrastructure and public amenities in the business park.

All major roads in the 10.34 sq km township and one of three subway stations have been completed.

The focus will be on building public amenities until 2020.

"We aim to complete 24 public amenities projects including five schools and six neighbourhood centres by the end of this year," said Mr Liu, referring to Singapore-style community hubs with shops, restaurants, health and sports facilities, among other things.

Some 30 per cent of the land area has been set aside for residential purposes and they will comprise commercial apartments as well as subsidised public housing meant for young high tech talents.

When fully completed, SSCIP is projected to have about 120,000 residents and about 150,000 others working in it.

"In about two years, we will start to see the township taking shape and gradually see more people living and working in there," Mr Liu said.