Mr Chen Jiulin (founder of Beijing Joseph Investment Co and former CEO of China Aviation Oil) wrote an opinion piece, "Singapore should support China's South China Sea stand too", in the Global Times recently, hoping that Singapore "will stop using US' power consistently to contain China". Mr Chen has good intentions, but I think it is quite difficult for Singapore to change its stand. A rough recap will provide some understanding on how Singapore's views on security came about. 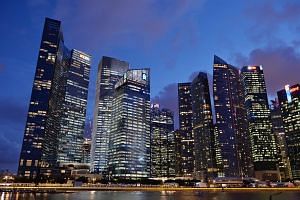 Singapore was at a loss when it was forced to leave Malaysia in August 1965. Fortunately, the strong leadership of the People's Action Party crafted a survival and development strategy to transform Singapore into a "global city". Simply put, it is to take advantage of Singapore's excellent geographical location and conditions to bring in capital from Western nations led by the United States, thereby giving the West a vested interest in Singapore. That way, not only will they help Singapore in economic development, but they will also provide security against attacks from Singapore's hostile neighbours. According to Lee Kuan Yew, this is called the "balance of powers strategy". If one recalls, in the early 1970s, he once clarified that "balance of powers" did not mean two evenly-matched sides in a confrontation but rather a "state of stability". There was already a so-called claim of "Pax Americana" at the time, and Singapore's security was mainly to take shelter under US wings, and in the eyes of Lee Kuan Yew, "balance of powers" actually meant American hegemony.

Singapore is part of common circle of friendship of US and China: Singapore envoy to China

For a long time after Singapore's independence, its "balance of powers strategy" was mainly targeted at hostile neighbours. After the opening up of China, Singapore enjoyed good relations with China and took a prominent position among Asean countries in forming economic and trade ties with it. But as we entered the 21st century with the swift rise of China, Singapore partook in the benefits brought about by China's rapid development, but at the same time gradually directed the "balance of powers strategy" towards China. Some say that Singapore's behaviour was a kind of suspicion and apprehension commonly harboured by small nations against big countries, so it is not a surprising move. But I think that, even if small and medium-size neighbours did harbour varying degrees of apprehension towards China, Singapore's position stood out considerably.

Firstly, Singapore leaders and think-tank scholars have hinted on several occasions that China will get aggressive once it becomes powerful. Among them, Lee Kuan Yew once said, the very name "China" meant "Middle Kingdom", and that "many small and medium countries in Asia are concerned. They are uneasy that China may want to resume the imperial status it had in earlier centuries, and have misgivings about being treated as vassal states". As Singapore is a country with a predominantly Chinese population, the international community has mistakenly perceived Singapore to possess a better understanding of China. Therefore, the above-mentioned opinion is rather misleading .

Secondly, Singapore is not an official military ally of the US, but it did not hesitate to allow US littoral combat ships to station at Changi Naval Base, and recently, the deployment of a P-8 spy plane. This has turned Singapore into a platform for the US to contain and deter China, and at times it seems even more anxious to boost hegemony in the Asia-Pacific than the US itself.

Thirdly, not only did Singapore "take sides" on the South China Sea issue, it also leaned towards Japan on the Diaoyu islands dispute. When Prime Minister Lee Hsien Loong visited Japan in August 2013, he reminded China that "whether it is the Senkakus (Diaoyu islands), whether it is the South China Sea", if China uses force, it will lose in terms of its broader reputation and standing in the world.

Such "hard-hitting" actions and comments from Singapore have increasingly drawn criticism from Chinese academics and in public opinion. In reality, there have already been voices and opinions from academics and the people which are different from the government's official stance. Singapore should reflect on this: Can it state clearly in what ways China has threatened its safety? Can it sustain the contradictory two-faced approach towards China? If the South China Sea conflict between China and the US deepens, and the US drags Singapore in, will Singapore remain safe?

The writer is a researcher at the Chinese Academy of Social Sciences (CASS) in Beijing. This article was published in the opinion section of the Global Times Chinese edition on June 1, 2016.