CHONGQING - In about three years, a logistics hub jointly developed by Singapore and Chongqing companies will be up and running, managing operations across road, rail and river in the upper reaches of China's famous Yangtze River.

Located beside Guoyuan Port in south-western Chongqing, the hub will facilitate the flow of container cargos transported via the river to the Southern Transport Corridor railway network.

The hub, which sits on two land parcels totalling 670,000 sq m, will have warehouses as well as provide services such as packaging and distribution.

On Wednesday (July 4), Deputy Prime Minister Teo Chee Hean, who is on a nine-day visit to China, visited the Guoyuan Port in the northern part of Chongqing city to find out more about the hub.

It is one of the key projects under the Chongqing Connectivity Initiative (CCI), the third joint project between Singapore and China. The initiative aims to spur growth in the less developed western China region by enhancing transport and trade links.

Mr Teo was briefed about the port by Chongqing Mayor Tang Liangzhi as well as representatives from the port and the Singapore-Chongqing joint venture company, the Sino-Singapore (Chongqing) DC Multimodal Logistics.

A highlight of the Singapore co-invested logistics hub will be a electric-powered monorail system for transporting containers from the river port to the nearby Yuzui railway station, which is about 3km away from the Yangtze River banks. 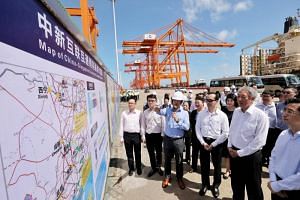 The fully automated 4km system promises to be a greener option than transporting the containers via trucks and is touted to be the first of its kind in China.

The system designed by a local Wuhan company is also said to be cheaper or equivalent to the cost of building roads connecting the port and the railway station.

The next step is to put this proposal through an international expert panel to validate the commercial and operational viability of the system, said Mr Gordon Tan, general manager of Sino-Singapore Chongqing Connectivity Solution, a joint venture company between Singapore and Chongqing companies that focuses on developing standards and practices for multimodal transport links.

"When the hub is ready, it will enhance (Chongqing's) inter-modal efficiency, linking up road, river and rail transport seamlessly," he added.

Mr Chen said Mr Teo has made great contributions to China-Singapore ties as the co-chair of the Joint Council of Bilateral Cooperation, a platform to discuss ways to enhance cooperation between both countries.

Noting that Mr Teo is visiting multiple cities, Mr Chen said: "It must be tiring but would definitely prove to be fruitful."

Mr Teo, who last visited the city of 30 million people in 2014, said both countries have a warm relationship going back 40 years, when the late Chinese leader Deng Xiaoping met Singapore's founding prime minister Lee Kuan Yew at a time when China was opening up to the world.

"They could see how China and Singapore could work together to contribute to China's development," said Mr Teo.

Later on Wednesday, Mr Teo will travel to Lanzhou, the provincial capital of western Gansu province. He will deliver a keynote speech at an investment and trade forum in the city on Thursday before returning to Singapore in the evening.