BEIJING - Singapore and China have agreed to set up a panel of international mediators who will help resolve disputes arising from projects under China's Belt and Road Initiative.

A memorandum of understanding was signed on Thursday (Jan 24) at the first China-Singapore International Commercial Dispute Resolution Conference, which gathered 300 government officials, lawyers and academics from both sides to discuss trends and developments in international arbitration.

The panel will comprise experienced mediation professionals from China, Singapore and countries involved in Belt and Road projects, who will familiarise themselves with the various jurisdictions.

In his opening speech at the conference, Senior Minister of State for Health and Law Edwin Tong said Singapore and China can jointly develop a "new way of settling cross-border commercial disputes that better reflects Asian values and is also tailored to Asia's needs".

As Asia's economies rise, so too will the need for legal services, especially those that will suit the region rather than bear western norms and values.

Mr Tong later told reporters that both sides are working on the specifics of this legal collaboration, but the choice of arbitrators and the set of rules used will be "a lot more tuned to how Asians might want to do business and, more importantly, how Asians might resolve disputes".

The MOU, signed by the Singapore International Mediation Centre and the China Council for the Promotion of International Trade, will see the two organisations jointly develop rules, case management protocols and enforcement procedures to handle dispute cases. 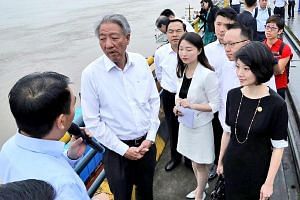 Singapore was an early supporter of the Belt and Road Initiative, an ambitious development strategy by Chinese President Xi Jinping to revive ancient land and sea trade routes linking Europe, Africa and Asia.

Infrastructural projects from building ports, industrial hubs, railways to road are already underway in many of the countries along the routes.

Singapore is tapping this mega enterprise in four ways. One is through the Chongqing Connectivity Initiative, an inter-governmental project that aims to improve transport and trade links with China's less-developed western region. Another is through developing joint projects with China in other countries that are part of the Belt and Road initiative. It is also offering financial and dispute resolution services to companies and institutions on Belt and Road projects.

Mr Tong said Singapore hopes to leverage its reputation for having a strong rule of law, a good system of resolution and impartiality.