BEIJING - Singapore and China have inked a deal that paves the way for closer partnerships between their companies in other countries involved in the Belt and Road Initiative (BRI).

Under the agreement, Singapore's Ministry of Trade and Industry (MTI), China's top economic planning body, the National Development and Reform Commission (NDRC), and Enterprise Singapore will identify sectors and markets of mutual interest and organise activities to promote cooperation between companies from both sides.

Both countries will work with other organisations to support businesses' financing and project structuring needs in third countries.

The MOU, signed by National Development Minister Lawrence Wong and NDRC vice-chair Zhang Yong, is part of a new push by both countries to deepen bilateral relations through cooperation in the megaproject. A second MOU on cultural cooperation was also inked.

Prime Minister Lee Hsien Loong and Chinese Premier Li Keqiang witnessed the signing at the Diaoyutai State Guesthouse on Sunday (April 8), the first day of PM Lee's five-day visit to China. At a bilateral meeting before the signing, both leaders identified their countries' cooperation under the BRI as "a new highlight in our bilateral cooperation", the Prime Minister's Office said in a statement.

This cooperation includes infrastructural and financial connectivity, and third-country collaboration, including joint training for officials from Belt and Road countries.

Minister for Trade and Industry Lim Hng Kiang said in a separate statement: "Singapore's strength as a key infrastructure, financial and legal hub in the region will add value to Chinese companies expanding along the Belt and Road."

The BRI, mooted by Chinese President Xi Jinping in 2013, is a plan to build infrastructure such as roads, railways, ports and industrial hubs to link some 65 countries across Asia, Europe and Africa, mirroring historic land and sea trade routes. 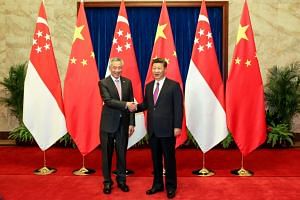 Deputy PM Teo Chee Hean is the Singapore co-chair of the JCBC.

Premier Li and PM Lee also reaffirmed the "close, deep and substantive bilateral relations" and welcomed the frequent high-level exchanges between both countries.

They also stressed the importance of maintaining an open and free trading system, and agreed to work towards concluding negotiations on the Asean-led Regional Comprehensive Economic Partnership free trade pact.

Singapore is the chair of Asean this year, and coordinator of Asean-China relations for the first half.

"We hope to make further efforts towards deepening and enhancing our cooperation bilaterally as well as with the region," said PM Lee.

Premier Li, who also hosted PM Lee to a working dinner, said advancing Sino-Singapore ties was "beneficial to both sides, and also the development of China-Asean relations".

PM Lee leaves Beijing on Monday for Hainan island, where he will attend the Boao Forum for Asia and meet President Xi Jinping.