A 19-year old survivor was pulled from the rubble on Wednesday (Dec 23), three days after a landslide in Shenzhen, China, that buried factories and workers' dormitories.

More than 70 people remain missing under debris spanning the size of 50 football fields, and rescuers are hard-pressed to reach survivors due to difficult conditions and terrain. Survival chances are highest during the 72-hour "golden period", experts say.

But there have been miraculous incidents of people surviving for many days before being rescued.

As rescue workers scramble to find more survivors in Shenzhen, here are cases of people found alive days after being trapped  in the aftermath of a disaster.

Naqsha Bibi was trapped in a small space in the ruins of her kitchen after an earthquake hit India and Pakistan in December 2005.

The 40-year-old woman  survived on rainwater and rotting food. But her inability to move, coupled with malnutrition, resulted in her muscles atrophying. She was found and rescued by relatives sifting through the debris of her house for materials.

Evans Monsignac survived for 27 days after the 7.0-magnitude earthquake in Haiti in January 2010.  He was trapped after the marketplace where he was a vendor was destroyed in the quake. The 27-year-old man stayed alive by drinking sewage water that seeped in under the rubble.

Monsignac was suffering from  severe malnutrition, dehydration and trauma when he was rescued.

In the same quake, a man was buried alive for 12 days before being rescued. He was trapped under rubble after an aftershock that struck Haiti two days after the 7.0-magnitude earthquake. He was found under the debris of a shop that had been repeatedly looted, and was suffering from severe dehydration and a broken leg when rescued.

A garment factory building in Bangladesh collapsed in May 2013, resulting in the death of over 1,000 people. Reshma Begum, a seamstress who worked there, was trapped by debris and survived on dried food and water. Rescue workers located the 19-year-old after hearing her cries.

14 days: Filipino buried in rubble of quake-hit resort in 1990

Pedrito Dy was rescued 14 days after he was buried under the rubble of a northern mountain resort hotel which collapsed after a 7.8-magnitude earthquake hit the Philippines in July, 1990.

Dy, 27, a cook who was also a body-building instructor at the hotel, reportedly survived on rainwater and urine. 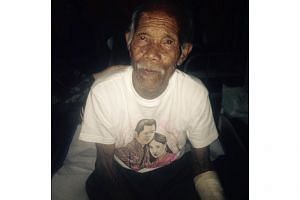 101-year-old Funchu Tamang  was pulled alive from the rubble of his house in Nepal seven days after it collapsed in a deadly 7.8-magnitude earthquake that struck Kathmandu on April 25, 2015.

He was taken to the district hospital in a helicopter with injuries on his left ankle and hand.  There were, however, conflicting reports about the man's age. Some media reports cited him as being 105 years old.