TOKYO (REUTERS, AFP) -  A seven-year-old Japanese boy abandoned in a dense forest by his parents for being naughty was found alive and unharmed on Friday (June 3), nearly a week after his disappearance set off a massive search that kept the nation riveted.

Yamato Tanooka was discovered in a building on a Japanese military base around 4km from where he disappeared last Saturday. His parents had left him by the side of a mountain road on the northernmost island of Hokkaido, reportedly as discipline for throwing stones at cars and people.

“One of our soldiers was preparing for drills this morning and unlocked the door of a building on the base, and there he was,” a member of Japan’s Self-Defence Forces told NHK national television.  “When he asked ‘are you Yamato?’ the boy said yes.  Then he said he was hungry, so the soldier gave him some water, bread and rice balls.” 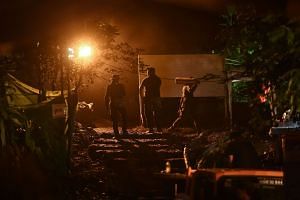 Yamato was taken to hospital for checks but was healthy except for low body temperature and would be kept overnight as a precaution, a doctor told a news conference.

A tearful Takayuki Tanooka, the boy’s father, thanked rescuers for their efforts and apologised for causing trouble.

“We’ve reflected on what we did and it was really excessive,” Mr Tanooka said, his voice shaking. “We – well, we loved him before, but I hope to give him even more attention now,” he said.

“My excessive act forced my son to have a painful time,” he told reporters outside the hospital where his son was being treated. “I deeply apologise to people at his school, people in the rescue operation, and everybody for causing them trouble,” he added, thanking the rescuers. 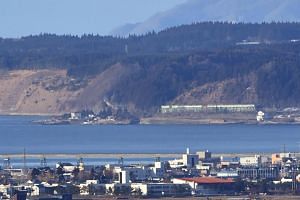 Missing Japanese boy was left in mountains as punishment: Police

The boy’s parents first said he disappeared while they foraged for edible plants, but later told police they had left him by the road to discipline him after he threw stones at people and cars.

They said when they drove back a few minutes later, the boy had disappeared. The area is so remote that residents of the region say they rarely go through it.

The boy somehow managed to survive for nearly a week in the densely forested area, where night temperatures were as low as 7 deg C and heavy rain had fallen.

Yamato said that he had “walked through the mountains” until he found the building, broadcaster NHK reported. He drank water from a nearby faucet and slept on mattresses spread on the floor.

The local town of Nanae requested military support after rescuers and police officers scoured the area for four days without success, with heavy rains at times hampering the search. The military joined the search on Wednesday, with a total of 75 personnel from the Ground Self-Defence Force deployed.

Rescuers said it was a frustratingly difficult task to find the boy due to a lack of evidence of his presence in the rugged mountainous area on the wild bear-inhabited island.

“We have done an unforgivable thing to our child, and we have caused a lot of trouble for everyone,” Yamato’s father Takayuki Tanooka told television reporters on Tuesday. “I just hope he is safe.”

The search has gripped Japan, with news programmes offering hourly updates, and thousands have taken to the internet to both pray for the boy’s survival and excoriate his parents for what is seen as neglect.

“If I was a small child in this situation I would either run after the car or wait there until they came back. I just hope he is safely found,” one person wrote.