In its editorial, the paper urges Seoul to play its part in ensuring Pyongyang is accountable for its actions.

KUALA LUMPUR (THE KOREA HERALD/ASIA NEWS NETWORK) - For observers here, what was conspicuously missing from Wednesday's talks between South Korean President Moon Jae In and Malaysian Prime Minister Mahathir Mohamad was the issue of Kuala Lumpur's abrupt release of an Indonesian woman accused of killing the half brother of North Korean leader Kim Jong Un.

Siti Aisyah was freed from custody without acquittal and allowed to return home on Monday, a day before Moon arrived in Kuala Lumpur for a three-day state visit.

Siti and her alleged accomplice, Doan Thi Huong from Vietnam, had been accused of smearing VX nerve agent on Kim Jong Nam's face in Kuala Lumpur airport in February 2017.

A Malaysian court released Siti after the prosecution dropped the murder charge against her without giving a reason.

Seoul has since remained silent on the move.

A Foreign Ministry spokesman said in a press briefing on Tuesday that it was inappropriate for the (South Korean) government to assess a measure taken by Malaysian authorities.

It may be Seoul's reticence itself that should be viewed as inappropriate, given that two years ago, it denounced Kim's murder as an "explicit act of terror."

Such a passive stance appears to reflect the Moon administration's tendency to avoid irritating Pyongyang while it is trying to improve inter-Korean ties even at the risk of disconcerting international efforts to tighten sanctions on the recalcitrant regime to push for its denuclearization.

Pyongyang has denied any involvement in the killing. But four men believed to be North Koreans, who fled Malaysia on the day of the murder, have been charged with masterminding it.

Commentators here have called on the government to raise issue with Malaysia's release of the woman accused of killing Kim, noting that under the South Korean constitution, Kim and all other North Koreans are considered to be South Korean nationals.

During his meeting with Mahathir, Moon appreciated Kuala Lumpur's support for the peace process on the Korean Peninsula.

Many South Koreans feel he should have also raised issue with the Indonesian woman's release.

The Moon administration's preoccupation with boosting cooperation with North Korea might have partly emboldened Malaysia to take the measure. 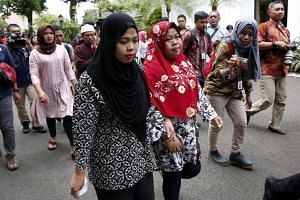 It seems out of point to say Kuala Lumpur has released Siti in a bid to improve estranged relations with Pyongyang as some observers here argue. Rather, the move appears to have come in response to repeated requests from the Indonesian government for her release.

It is noticeable that the release came as Indonesian President Joko "Jokowi" Widodo is seeking to be re-elected on April 17. Siti's release could help demonstrate Jokowi's commitment to ensuring his government protects every Indonesian citizen facing difficulties abroad.

In his reply to a letter from his Indonesian counterpart last week, Malaysia's Attorney General Tommy Thomas said the prosecution was going to drop charges taking into consideration bilateral relations between Kuala Lumpur and Jakarta.

After Siti was discharged, Mahathir said the decision was in line with the "rule of law," noting there is a law that allows charges to be withdrawn.

But his remarks did nothing to explain the abrupt turnaround in the stance of Malaysia's law enforcement authorities, which had said circumstances surrounding Kim's murder pointed to the two women being trained assassins.

Siti and Huong have claimed they were innocent victims of an elaborate North Korean plot, saying they thought they were part of a reality TV prank.

Their claim should be confirmed through the process of trial. Siti's release came on the same day that the defense phase of their trial was set to begin with testimony from Huong.

It was only natural for the Vietnamese government to come out to ask for Huong's release. Vietnamese Foreign Minister Pham Binh Minh made the request of his Malaysian counterpart Saifuddin Abdullah during their phone talks Wednesday, according to a Vietnamese news outlet.

Huong's release might also be a matter of time if diplomatic considerations were taken into account as in the case of her Indonesian accomplice.

It is necessary to restrain political expediency from being stretched too far to hamper judicial efforts to shed light on Pyongyang's crime. Failure to do so would give the wrong signal to North Korea that it could get by without being held to account again in the future.