SEOUL (THE KOREA HERALD/ASIA NEWS NETWORK) - They are considered the worst type of housing in Seoul - rooftop apartments.

They get too hot during summer and too cold during winter, but they tend to be the housing of choice for low-income earners, young students and the elderly who live below the poverty line because they are among the cheapest options available in Seoul's pricey housing market.

Seoul Mayor Park Won-soon on Sunday (July 22) left his big and spacious official residence in central Seoul and moved into a humble rooftop dwelling in an underdeveloped area in the northern part of the city.

For the next one month, the 30sq m apartment is now being used as both his home and office. The city government spent two million won (US$1,762) for his stay in the rooftop apartment in the district of Gangbuk-gu.

The tiny apartment has two tiny rooms and a bathroom, but no air conditioning. 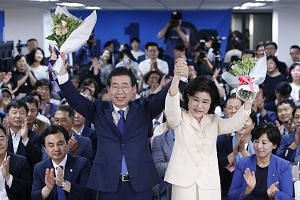 Park, who was elected to his third term as Seoul mayor last month, says his move is to "experience" the everyday lives of Seoul citizens and to understand their housing concerns, especially those who live in Gangbuk-gu.

He had promised during his election campaign he would live in northern Seoul for a month, should he get re-elected.

He pledged to find ways to reduce inequality that exists between those living in northern Seoul and those living in the more affluent southern parts of Seoul, such as Gangnam.

"I believe both the problems and the answers are at the scene, rather than the office of the City Hall," Park told reporters after moving into his new home.

"When I first moved to Seoul after finishing middle school, I also lived in a house that was built on a hillside. So I'm not totally new to such an environment," Park told reporters.

"It's a rooftop house, so I assume it's going to be very warm. I'll try to listen to what the residents have to say during my stay here and consider them thoroughly."

A heatwave has sent summer temperatures in South Korea to record highs this year.

Park said he would use a fan to help him endure the hot and humid weather. He will also be reading books such as The New Urban Crisis by Richard Florida .

But Park's move has generated controversy in South Korea.

Some say it gels with his reputation as a "grassroots-centered mayor" and will give him an opportunity to experience what it is like living in an underdeveloped area in Seoul.

Others including opposition lawmakers slam it as a political gimmick and a waste of taxpayers' money.

"It's not like he's going to live there for his entire term - he has pleasant housing to go back to after a month. But such accommodation is an everyday reality for real people," said a Seoulite surnamed Lee.

"He's only exploiting the experience of others for his own political benefit."

The Seoul mayor has shrugged off the negative responses.

"The neighbours I have met so far have welcomed me, and talk about the problems they face. My rooftop stay is totally different from existing political practices of making an appearance for a little while (ahead of the elections)," Park said.

UN housing expert Leilani Farha, who visited South Korea in May, said she was "alarmed" by the unaffordability of housing in metropolitan areas for young people and low-income households.

"Korea has some distance to go to ensure that human rights protections in housing extend to all vulnerable groups," the UN rapporteur said in a statement.

She added that South Korea's low-income households - defined as the poorest 20 per cent - tend to spend 50 per cent of their income on housing, which leaves "scant resources" for other basic needs, including food and medicine.

Gangbuk-gu, where Park's temporary residence is located, is one of the four poorest districts in Seoul, along with Gwangjin-gu, Seongbuk-gu and Jung-gu.

The wealthiest districts in Seoul - Seocho-gu and Gangnam-gu - are all located in southern Seoul.