SEOUL (KOREA HERALD/ASIA NEWS NETWORK) - About 10 days after an allegation of multiple rapes was made public against former South Chungcheong Province Governor Ahn Hee Jung, a second alleged victim filed a legal complaint against him for sexual assault on Wednesday (March 14).

The woman says she was sexually assaulted by Ahn seven times over the course of more than a year, from October 2015 until January last year. Of the seven assaults, the victim alleges she was raped on three occasions.

The woman worked for a think tank founded by Ahn. In the most recent instance, the woman said Ahn raped her in a hotel room in Yeouido, Seoul, last year. She also said she was raped by the ex-governor in Nonsan, South Chungcheong Province, at a religious facility in 2016.

Her complaint was submitted to the Seoul Western District Prosecutors' Office on Wednesday afternoon.

Once a rising star in South Korean politics and a presidential hopeful, Ahn resigned from his governor post after his former secretary, Kim Ji Eun, made her sexual assault claims public.

Kim's allegation came amid the dramatic spread of the #MeToo movement in Korea, ignited by Prosecutor Seo Ji Hyun in January when she disclosed her sexual harassment experiences on a TV news programme.

Since Ahn's fall from grace, other allegations of sexual misconduct and extramarital affairs have been made against other powerful politicians. 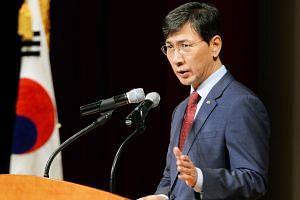 On Wednesday, Park Soo Hyun, a former spokesman for President Moon Jae In and a leading candidate in the race for South Chungcheong Province governor in the June local elections, dropped out of the race amid allegations of an extramarital affair and an accusation that he helped the woman be nominated in a local councillor election in 2014.

Chung Bong Ju, a former left-leaning lawmaker currently running for Seoul mayor, sued six reporters Tuesday for spreading what he called "false rumours" that he had attempted to kiss a college student in 2011.

He announced that he is still running for Seoul mayor despite the ongoing controversy caused by the "false rumours".

On March 7, a local media outlet published an exclusive interview with a woman who claimed to have been sexually assaulted by Chung.

The victim, a journalist, alleged that Chung attempted to hug and kiss her, without her consent, at Kensington Hotel in Yeouido, Seoul, on Dec 22, 2011. She was a college student at the time.

Chung has been denying the allegations, claiming that he did not visit the hotel that day.