BEIJING - Malaysia's scrapping of a planned high-speed rail link with Singapore would likely damage the interests of China and other economic partners, a state-backed Chinese tabloid said on Thursday (May 31).

Companies that were eyeing contracts to build and operate the project were reportedly from China, Japan, South Korea, Europe, Singapore and Malaysia. And now, all their efforts may be in vain, Global Times said in its column, Eye on The Economy.

Following the announcement to ditch the plan, Tun Dr Mahathir said his government is also in the process of renegotiating with China a rail deal aimed at connecting the South China Sea at the Thai border in the east with the strategic shipping routes of the Strait of Malacca in the west, according to Reuters.

Global Times said that if Dr Mahathir wants to review big projects agreed to by his predecessor and damage the interests of Chinese companies, "those companies have the right to claim compensation".

"The Chinese government will also take concrete measures to safeguard the interests and rights of Chinese enterprises," the tabloid said.

"If Malaysia's new government fails to adhere to the spirit of the contract, it has to pay price for its error," it added. 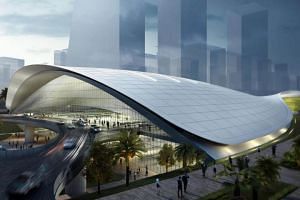 Global Times also said that Malaysia is not the only investment destination for foreign infrastructure businesses.

" It's very easy for Chinese companies to shift their focus to other countries, but Malaysia's economy is the one that will suffer big losses," the tabloid warned.

It added that uncertain economic policies driven by political factors "are a reason why some developing countries have failed to achieve an economic take-off".

"Sino-Malaysia friendship is time-tested. Malaysia is a key point along the routes of the Belt and Road Initiative. Chinese investors will continue to look closely at Malaysia's economic situation in search of opportunities for cooperation."