TOKYO (AFP) - Hundreds of fishmongers on forklifts and trucks rose before dawn in Tokyo on Sunday (Oct 7) to join a mammoth exodus of vendors as the world-famous Tsukiji market relocates to a new site.

In small vehicles and the market's famed "turret trucks" - one-man flatbeds with a barrel-shaped steering column at the front - they drove out of the Tsukiji site one last time, headed for Toyosu, the market's new home.

The main bridge out from the market was closed to traffic for the move, with security guards in place to wave along the leaving wholesalers, who drove in orderly lines between safety cones topped with flashing red and green lights.

Hundreds of the 900 businesses that once handled 480 kinds of seafood worth US$14 million (S$19 million) daily - as well as 270 types of fruits and vegetables - are relocating.

A total of 2,600 turret trucks and forklifts will drive about 2.3km from Tsukiji to the new site over a period of five days, according to the Tokyo metropolitan government.

The move began a day after the last tuna auction at the market, a pre-dawn ritual for Tokyo's food world that also once drew crowds of tourists hoping for one of just 120 spots to watch.

The 83-year-old market's move has been in the works for decades, prompted by its rundown state, but it has been a lengthy and controversial process, hindered by pollution rows and construction delays. 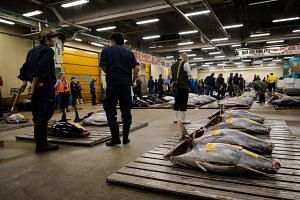 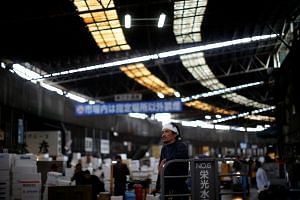 Tsukiji's replacement all ready to impress

The discovery of soil contamination at Toyosu, formerly home to a gas plant, sparked safety fears about the new site and forced local authorities to spend millions of dollars to clean up the area.

After experts declared Toyosu safe, the Tokyo governor took the final decision to move the market there in late 2017, ending years of delays.

But while the new site promises state-of-the-art refrigeration and will keep gawping tourists away from the business of the market in a gallery behind glass, the move has still left a bitter taste for some.

"I feel nostalgic, as Tsukiji has been my home ground for 15 years. We are sad to lose the Tsukiji brand," vegetable wholesaler Tsukasa Kujirai told AFP on Saturday.

Opened in 1935, Tsukiji was, for many years, known only to its vendors and the food industry, but it gained international reknown in recent decades and its tuna auctions even hit the headlines, with one fish going for a record US$1.8 million at the market's New Year's auction in 2013.

Toyosu will officially throw open its doors on Oct 11.