China’s Foreign Ministry has commented on the seizure of Singapore Armed Forces (SAF) military vehicles and equipment by the Hong Kong customs, even as the SAF dispatched officers to Hong Kong “to address the security of the equipment”.

At a routine press briefing on Friday (Nov 25), the ministry's spokesman Geng Shuang said China is currently verifying the related details when asked if Singapore has to contact the Chinese Foreign Ministry for the release of the vehicles.

"All people and goods entering Hong Kong Special Administrative Region should follow the laws of the SAR. I'd like to reiterate that the Chinese government firmly opposes any of the countries that has diplomatic ties with us to have any form of official exchanges with Taiwan, including defence exchanges and cooperation," said Mr Geng in response to another related question.

Singapore's Defence Ministry (Mindef) said in a statement on Friday that a SAF team is en route to Hong Kong "to address the security of the equipment".

This comes a day after the territory's customs officials seized nine Singapore-bound armoured vehicles and related equipment on board a container ship from Taiwan.

In the meantime, Japanese-owned container shipping firm APL, which was hired by the SAF to transport the cargo, has "assured the SAF that they are working with Hong Kong authorities to resolve the issue", Mindef added. 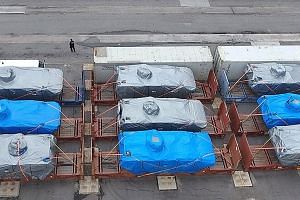 Mindef said that APL was required to comply with all regulations including the declaration of transported equipment in the ship’s cargo manifest. This included obtaining the necessary permits required to transit through ports.

Shipped in 12 containers, the cargo comprises nine Terrex Infantry Carrier Vehicles "with no ammunition or sensitive equipment on board", said Mindef.

"During the transit through Hong Kong, customs officials raised queries if the necessary permits and declarations by APL were in order and in the process detained the Terrex ICVs," said the statement.

The Singapore Consulate General in Hong Kong is also assisting in this matter, it added.

The SAF conducts overseas training in a dozen or so countries, including the United States, Australia, Germany and India. In doing so, it hires commercial shippers to transport military equipment to and from Singapore.

Mindef said that all commercial shippers used by the SAF are required to comply with stringent requirements for protection against theft and tampering of equipment during the shipment as well as applying for all relevant permits. "These requirements have worked well and there have been no incidents of losses, theft or tampering over the years," said Mindef.

It added: "The SAF will review the circumstances of this incident and determine if added measures are required to prevent such occurrences."

Hong Kong Customs told The Straits Times that the "suspected control items have been moved to a temporary storage place of Customs in Tuen Mun for further investigation". They would not confirm if the Chinese Foreign Ministry has been officially informed of the seizure.

Quoting sources, the South China Morning Post said in a report that Singaporean authorities will have to contact the Chinese Ministry of Foreign Affairs to secure the return of the armoured vehicles.