HONG KONG (BLOOMBERG) - Almost two months after Dr He Jiankui retreated from view after shocking the world with claims that he edited the genes of twin baby girls, the Chinese scientist told a Stanford University fellow researcher that his home is being guarded as the authorities investigate his controversial work.

Dr He and his family are living in university housing on the grounds of Southern University of Science and Technology in Shenzhen, with guards stationed outside his apartment, said Dr William Hurlbut, an adjunct professor at Stanford Medical School who has been in touch with the Chinese scientist.

Dr He has been communicating with Dr Hurlbut by telephone since the scientist's last public appearance at a research conference in Hong Kong in November, the American academic said.

"He told me that in both his living situation and in the process of the investigation, he's being treated respectfully," Dr Hurlbut, a neurobiologist whom Dr He had consulted over the past two years on his genetics research, said in an interview on Thursday (Jan 10).

Dr He's claim that he altered the genes of recently born twin girls while they were embryos in a bid to make them HIV-resistant ignited a global backlash. His university disavowed his work and fellow researchers including Dr Hurlbut rebuked the scientist.

The government halted work at his lab and is carrying out an investigation, saying it would take a "zero tolerance attitude in dealing with dishonourable behaviour" in research.

It also asked universities last month to inspect all research work on gene editing and confirm there were no ethical breaches. 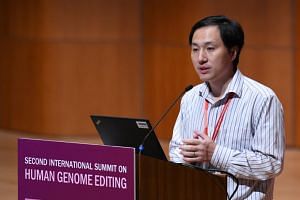 Why are scientists so upset about the first gene-edited Crispr babies?

The whereabouts of the Chinese researcher have been a mystery since November. However, he can go out for walks, e-mail and call friends, according to Dr Hurlbut.

The Chinese scientist thinks the guards provide "reasonable" protection, given the wide "range of reactions to his research," Dr Hurlbut said.

Given Dr He's descriptions of his situation, the Stanford professor said he was surprised by a recent media story that speculated Dr He could face charges that result in a death penalty.

Dr He could not be reached for a comment. His spokesman declined to comment, as did a representative for his university.

The scientist, criticised for being surreptitious about his gene-editing project, was defiant in November, saying he was "proud" of his work and was moved to pursue it out of compassion for those stigmatised and afflicted with HIV.

Even as Dr He waits for the siege to lift, his research has sparked a broader global debate on where the scientific community and governments draw the line on pushing the boundaries of genetics science.

"When it comes down to discussions about what the investigation has shown, what should happen and what we need to do, it's a much bigger story. This is not just about J.K.," said Dr Hurlbut, who calls Dr He by his initials. "It's about the whole meaning of how we govern and guide international science."