TOKYO - A ministerial meeting to push the 16-nation Asean-led trade pact kicked off here on Sunday (July 1) as leaders sought to realise their goal of reaching a deal by the end of this year.

Japanese Prime Minister Shinzo Abe told ministers at the start of the meeting for the Regional Comprehensive Economic Partnership (RCEP): "As a torchbearer of free trade, Japan has been making lots of effort to spread the free, fair and rules-based economic sphere throughout the world. And next in waiting is RCEP."

He pointed to Parliament's passage of Bills last Friday required for the ratification of the revised Trans-Pacific Partnership, while Japan and the European Union are also set to ink their free trade agreement later this month.

Sunday's RCEP ministerial gathering - the first to be held outside Asean - is co-chaired by Singapore's Minister of Trade and Industry Chan Chun Sing and his Japanese counterpart Hiroshige Seko.

Both leaders, pressing the ministers to seize the momentum, called for strong political will to move forward on the agreement to fight the headwinds of protectionism.

"At this point in time, we have a reached a stage where we are very near, and we can see the possibility of having a substantive conclusion for the RCEP negotiations by the end of this year," Mr Chan said in his opening remarks at the outset of the meeting. "I would encourage every one of us here, at this juncture, to seize the moment, and exercise maximum flexibility for us to close the last few steps of our negotiation."

He added, without elaborating: "We all also know that if we miss this moment, it will be very difficult for us to sustain the momentum going forward, because various countries will face various domestic circumstances that might not allow us to sustain this momentum easily." 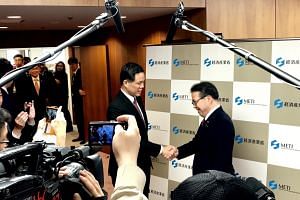 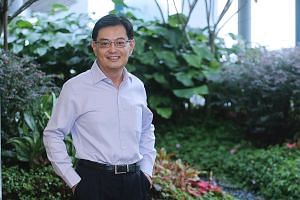 Review of key pact with India will open new areas of cooperation: Heng

Mr Seko, meanwhile, too expressed hopes for an RCEP conclusion by the end of this year. He said: "I know it's not easy, but depending on our political will and how we go about it, it is more than feasible."

RCEP covers the 10-nation Asean bloc, as well as Australia, China, India, Japan, New Zealand and South Korea. Collectively, they account about half the world's population - as well as 30 per cent of the world's economy and trade.

The pact comprises 18 chapters, of which just two have been concluded. These are in the areas of economic and technical cooperation, and in small and medium-sized enterprises.

Mr Abe, in illustrating the RCEP's reach on Sunday, said that the pact was not only about eliminating tariffs and increasing trade, but also about drawing a "very ambitious picture for Asia's future".

Setting free rules for e-commerce, he said, will enable micro-businesses, like those that sell coconut oil to tourists on the streets of Yangon, to reach a market of 3.5 billion people through the Internet.

Moves to protect intellectual property (IP), he added, will allow for such things as the state-of-the-art medical technology developed in Australia to be made widely available. This means those living in RCEP countries will be able to get simple and accurate diagnoses, thereby markedly improving the quality of healthcare.

"Further, with 3.5 billion people combined, it can lead to the next innovation breakthrough," Mr Abe said. "There are lots of investments and promising, talented people who will find their way to this region in Asia."

Progress on the RCEP is being intently watched as the world contends with protectionism, with numerous countries taking retaliatory measures against tariffs that have been imposed by the United States.

A target has been set to reach an RCEP agreement this year, potentially at the Asean summit hosted by Singapore in November. After the meeting in Tokyo on Sunday, RCEP trade negotiators will gather in Bangkok from July 17 to 27 for their 23rd working level talks.

RCEP ministers will then meet in Singapore, in end-August, for their next gathering on the sidelines of the Asean Economic Ministers' Meeting.

Mr Chan said: "We hope that by the Ministers' meeting in August we will be able to lock in the substantive part of the negotiations, and then we can work out the minor details, in preparation, for the Leaders' Meeting at the end of the year."