Though Japan's government maintains that eating whale is a cherished part of its food culture, nationwide consumption didn't really take off until after World War II and peaked in the early 1960s before falling as other protein sources became cheaply available.

A 1986 global whaling moratorium made whale a pricey food that rarely appears on family tables or in ordinary supermarkets, with vendors relying on Japan's scientific research whaling for their supply.

"A lot of people came in after hearing that the research whaling had ended, worried that they couldn't get whale anymore," Ms Ichihara said. "They were surprised to hear whale is taken in Japan too."

True aficionados have endured, sating their whale cravings largely through speciality restaurants such as the one Ms Ichihara, 42, operates in Minamiboso, just east of Tokyo.

Several restaurants have come up with whaleburgers, a patty of whale meat sandwiched between buns or pressed rice.

Ms Ichihara's restaurant offers many of these, as well as a unique take on traditional whale treats: fried whale dressed with slivered vegetables and vinegar, grilled marinated whale steak, and raw whale chopped with miso and scallions.

Aficionados say whale tastes somewhat like beef, but with a stronger flavour. Whaling advocates point to its high protein content and low carbon footprint compared with other meats.

Ms Ichihara's mother-in-law, Yachiyo, praises it as an ideal food. 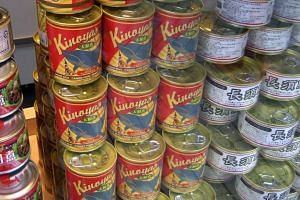 Whale represents only 0.1 per cent of Japan's meat consumption, so proponents say getting the next generation to eat it is essential.

Schools occasionally serve it for lunch, including some - like those in Chigasaki, a city west of Tokyo that is not a traditional whaling area - as a way of teaching children what people ate in the past.

To make it appealing to students, whale is usually served as fried nuggets, often with a soy-ginger sauce or ketchup, said Ms Emi Yamaguchi, at the Chigasaki Board of Education.

"Since it's such a rare thing, it'd be too bad to have lots left over," she said. "It's a special event so the kids are excited, and we make it in ways that appeal to them."

The Ichiharas have taken part in whale-cooking contests to develop new dishes, with prizes going to items such as whale-filled spring rolls. A Minamiboso roadside store stocks whale-stuffed Chinese buns and whale ham along with more traditional items and cookies sold in boxes decorated with whales.

Ms Ichihara wishes more people ate whale at home, but is reassured by the restart of commercial whaling.

"I'd be concerned if I heard we couldn't eat whale in Japan, but since we'll be able to take them here, I have no worries," she said.

But she also noted wryly that the restaurant's most popular menu items are things like whale cutlets and croquettes.