BEIJING (NYTIMES, REUTERS) - Eighteen people were killed and 14 were missing in eastern China on Saturday (Aug 10) in a landslide triggered by a major typhoon, which also caused hundreds of flight cancellations and the evacuation of more than one million people after veering north of Taiwan.

The storm, Typhoon Lekima, made landfall in Zhejiang province near the city of Taizhou at about 1.45am with maximum winds of 187km  per hour, although it had weakened from its earlier designation as a "super" typhoon, the official Xinhua news agency reported.

China’s weather bureau on Saturday issued an orange alert, its second highest, after putting out a red alert on Friday, when the storm forced flight cancellations in Taiwan and shut markets and businesses on the island.

About 700,000 people had been relocated before the storm's arrival, with more than 100,000 moved to disaster prevention centres, according to Xinhua.

The deadly landslide occurred about 130km north of the coastal city of Wenzhou, when a natural dam collapsed in an area deluged with 160mm of rain within three hours, state broadcaster CCTV reported.

The storm was moving northward at 15kmh and was gradually weakening, Xinhua reported, citing the weather bureau. High winds and heavy rains battered the financial hub of Shanghai on Saturday afternoon.

Thousands of flights were cancelled in eastern China, according to the country’s aviation regulator, with most flights into and out of Shanghai’s two major airports cancelled on Saturday afternoon, their websites showed.

Nearly 200 hundred trains through the city of Jinan in Shandong province had been suspended until Monday, Xinhua reported.

More than 250,000 residents in Shanghai and 800,000 in Zhejiang province had been evacuated due to the typhoon, and 2.72 million households in Zhejiang had power blackouts as strong wind and rain downed electricity transmission lines, state media reported.

Some 200 houses in six cities in Zhejiang had collapsed, and 66,300ha of farmland had been destroyed, CCTV said. 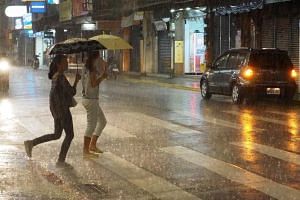 The typhoon also forced the closure of Shanghai's Disneyland.

Earlier, city and county governments in northern Taiwan had cancelled work and classes Friday in anticipation of heavy rainfall and strong winds from the storm. With the typhoon tracking toward the capital, Taipei, and other major cities in the area, shoppers cleared the shelves of grocery stores of fresh produce in anticipation of being stuck indoors for the day.

The authorities in the eastern province of Shandong said torrential flooding was likely in parts of the province for several days, adding that the downpours would also help ease drought concerns and replenish reservoirs.

The maritime safety authorities in Hangzhou said that starting on Thursday, 244 passenger ships had suspended service and that 432 ships carrying hazardous materials had entered sheltered waters.

The provincial authorities in Jiangsu province, where the storm is predicted to reach by the early hours of Sunday, said operations were underway to increase drainage of major lakes and ports in the region to bring down water levels before the rainstorms, according to local media reports.

Coastal businesses in Zhejiang were shut and the Ministry of Emergency Management warned of potential risk of fire, explosions and toxic gas leaks at chemical parks and oil refineries.